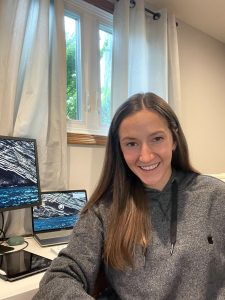 If her experience holding offices for Mizzou organizations is not proof enough that Riley Jackson is a born leader, her internship with Apple is a true testament to her leadership potential.

As an Engineering Program Manager for new product introduction, Jackson leads a team of engineers through the development and manufacturing of new products set for mass production. The role has Jackson managing a team, including leading meetings and overseeing a budget.

“Whereas sometimes in internships, you’re given little tasks to do, I am the one who’s fully responsible for where this project is going,” said Jackson, who’s majoring in electrical engineering.

At Apple — named the world’s most valuable company in January — she is able to utilize her technical knowledge as a foundation for leading an engineering team. This internship, which has her working on an inductive charging team for Apple Watch, has also reaffirmed the reasons that she chose to pursue engineering. Jackson became interested in health care after volunteering with individuals who have severe motor disabilities. She now hopes to someday work for a company like Apple where she can develop products that assist with health care monitoring and ensure that devices are accessible to those with physical disabilities.

“They are often overlooked by the general engineering market,” she said.

Jackson also enjoys the leadership experience and is interested in pursuing program management as a career. This should come as no surprise, though, given her track record of service in Mizzou organizations.

During her freshman year as a Discovery Fellow, Jackson served as undergraduate researcher in Associate Professor  Heather Hunt’s bio-materials lab in the Biological, Biomedical and Chemical Department. That year, Jackson also participated in alternative breaks, where she traveled to Philadelphia to take part in service initiatives with Project C.U.R.E. and MANNA. She was also selected as one of only 10 students across the country to take part in the Fulbright Summer Institute at the University of Strathclyde in Scotland. That program, which focused on technology, innovation and creativity, showed Jackson the real-world applications of engineering in international businesses.

At Mizzou, Jackson is a member of several organizations. She serves as an Honors Ambassador for the Honors College and service chair for the Mortar Board Society, one of Mizzou’s secret societies. She is also an active member and former philanthropy chair of Alpha Omega Epsilon, a sorority for women engineers; director of finance for the Society of Women Engineers; President of Eta Kappa Nu, the honors society for electrical engineers; and President of the Mizzou Engineering Student Council. Through these organizations, Jackson has participated in and led initiatives for service, professional development and outreach, something for which she is particularly passionate.

Though Jackson, a Kansas City native, was hesitant about attending Mizzou because of its popularity among her high school classmates, her visit to the campus and Mizzou Engineering sealed her fate to become a future Tiger. After visiting several schools, she said she could see herself at any of them, but Mizzou was the only one that felt like “home.”

“Everyone’s super close and it’s like a family within the College of Engineering,” Jackson said. “I could tell the professors deeply cared about individual students rather than just numbers.”

Jackson says the College has played an important role for preparing her for her internships and career. While Mizzou’s many organizations have prepared Jackson for leadership, her professors have provided the hands-on learning and understanding of real-world applications to make her industry ready. Mizzou Engineering has also provided opportunities for professional development, such as resume reviews and interview prep, which helped her secure her current internship as well as a previous internship at Kansas City-based Black & Veatch.

Jackson’s leadership experience with Apple concludes in August, when she will rejoin her Mizzou Engineering family and resume her place as a leader on campus, a role it seems she was born to undertake.