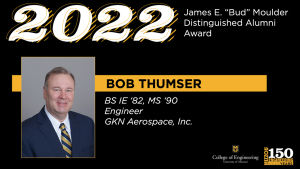 “I’m greatly honored to accept this award,” he said. “I’m thankful and glad to know I have been an asset to the department over the years.”

Thumser’s contributions have been vast. He was a founding member of the IMSE Industrial Advisory Board when it was revitalized in 1998, and he has consistently attended meetings every semester over the past 23 years. He’s evaluated Capstone Design Team projects, helped ensure curriculum is up-to-date and has been involved in multiple strategic planning initiatives for the department. Thumser has also provided industry insight for ABET accreditation.

In 2011, Thumser was inducted into the IMSE Hall of Fame. He has been on the Hall of Fame Board of Directors since 2015, serving as president in 2020.

“Bob is a true Mizzou Tiger who has generously given back to support the success of the IMSE department and our students,” his nominator said.

What’s kept him active with Mizzou Engineering for more than two decades? Thumser said it’s stems from his appreciation for his education

“I think Mizzou’s strongpoint is that it gives you a strong core engineering foundation,” he said. “They give you valuable tools you can use to solve problems.”

Thumser also expressed gratitude for the professors who helped guide his path. Specifically, Dr. Owen Miller connected him with Goodwill Industries in St. Louis for a summer job establishing a performance measurement system for their Sheltered Workshops program, an experience for which Thumser said he’s always been grateful. And Dr. Mike Leonard encouraged him to pursue graduate school, something he hadn’t previously considered.

His master’s degree helped Thumser secure a position at McDonnell Douglass, where he served in a number of roles including team manager, group manager and principal specialist. He later managed groups at The Boeing Company and became an employee of GKN Aerospace following the Boeing sale of their fabrication center. Thumser is now retired following a 37-year career in the aerospace industry.

His industry expertise has especially helped IMSE students interested in career options. Thumser encourages other alumni to consider supporting the next generation, as well.

“One of the ways they can participate is just by sharing their stories and sharing with students what they do,” he said. “Students appreciate being able to hear about those real-life problems and how you solve them. I’ve just really enjoyed going back and helping out. I’m thankful for the opportunity to give back.”