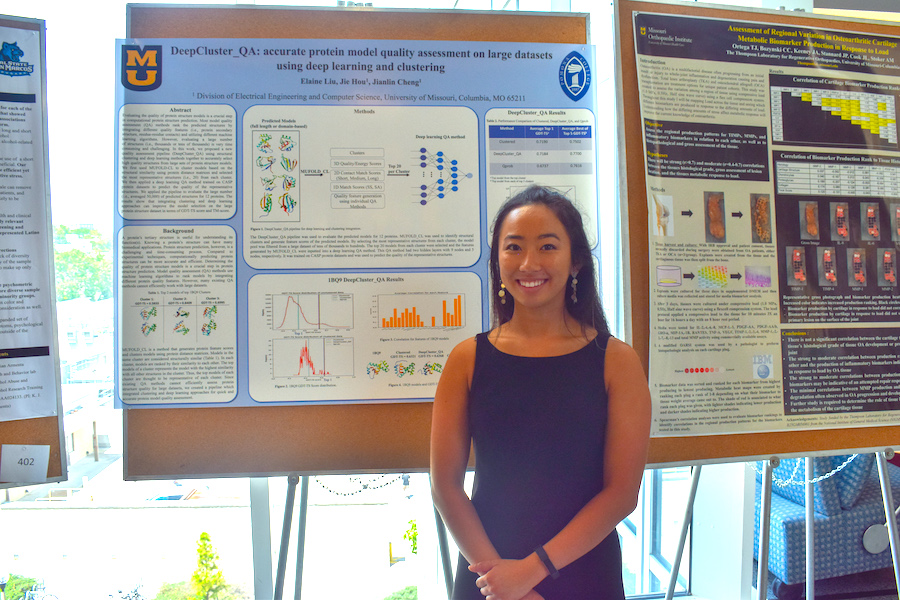 Elaine Liu was one of 10 participants in the NSF REU, one of three neuroscience-focused programs this summer at Mizzou. Photo by Liz Lannin.

If you’re looking for a holistic approach to neuroscience research and education, the University of Missouri is the place to be each summer thanks to three federally funded, interdisciplinary programs.

Electrical Engineering & Computer Science Professor Satish Nair leads an interdisciplinary team of faculty and grad students who put on two programs funded by the National Science Foundation and another by the National Institutes of Health. Together, these train K-12 teachers who educate the next generation of potential neuroscientists and current undergraduates, faculty, postdoctoral researchers and doctoral candidates.

Basically, Mizzou and Mizzou Engineering provide training that affects the entire pipeline of neuroscientists — from students as young as middle school all the way through current research professionals. Here, we look at all three programs.

The oldest of these programs is the NSF REU site “Summer Research Projects in Neuroscience.” Ten undergraduates from across the country came to Columbia for a ten-week program where they received real-world neuroscience research experiences with faculty from across the spectrum, including researchers from Engineering, Arts & Science, Medicine and Veterinary Medicine.

“The NSF thinks computation is growing in importance in neuroscience, an area that has seen a 592% increase in PSAT major selections among 9-11th graders,” Nair explained.

Most of the participants hailed from smaller institutions with limited research opportunities. The goal of this REU is to demonstrate the importance of collaborative research in the field — including how computational methods can play a key role in neuroscience research — and give students the chance to work on projects in all neuroscience levels, including cellular, systems, cognitive and behavioral. The REU also offers a one-credit hour course on computational methods.

“Finding this program with the computational aspect and neuroscience aspect was a perfect match,” said Erin Shappell, a participant with 4.0 GPA, completing her computer engineering degree at Clemson University.

There’s an increasing need for neuroscience education even before college, as students increasingly show an interest in an ever-growing field. To do that, however, elementary, middle and high schools need teachers who understand the field and how its research projects are conducted.

That’s why, for the first time, MU offered Research Experiences for Teachers in Neural Science or Neural Engineering — a six-week program that saw teachers from across Missouri embed themselves alongside faculty and REU students to learn the ins and outs of key neuroscience research.

“It’s cool to see them not only get the research, but build it into something translatable for their students,” EECS doctoral student Ben Latimer said. “Some of them are teaching as young as fifth or sixth grade. So to take the material they’re learning at this level down to that level is interesting, and their kids seeing or hearing that neuroscience is an option is a big influence.”

The teachers in the program also build curricula based on the information they gather while studying the research, thus gaining the skills needed to translate what they’ve learned to students of a variety of ages.

“NSF wants them to enlarge their repertoire so they can appropriately bring that back to the classroom,” Nair said.

It also provides the REU students the opportunity to share their knowledge with these teachers, an added benefit for any participants who may be interested in becoming faculty members down the line.

“I get a taste of what it would be like after grad school if I pursue a faculty position at a university, and I get to see what it’s like to both teach the research and pursue it myself,” Shappell said.

The National Institutes of Health, meanwhile, have an interest in creating more advanced-level researchers in neuroscience, and it’s the fourth year the organization has sponsored MU’s Interdisciplinary Research Training in Computational Neuroscience program.

Similar to the REU and RET, the Brain Initiative exposes participants to world-class research in neuroscience. But in this case, the participants are faculty, post docs and PhD students. So, instead of exposing them to entry-level concepts, the goal is to give them the tools they need to take their research to the next level or to begin advanced neuroscience research.

And it takes place in just one week, with 12-hour days.

“It’s essentially a boot-camp, but they really liked it a lot,” Nair said.

The time crunch wasn’t the only part that was intense, however. The level of information disseminated was, too.

“It’s fairly intense, all high level,” Latimer said. “These are researchers, and we’re exposing them to advanced research.”