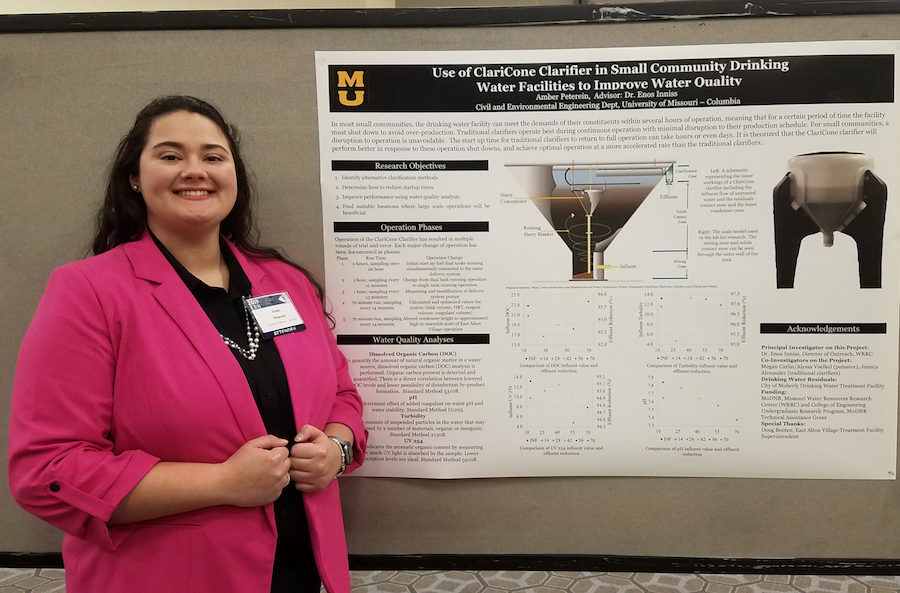 The Emerging Researchers National Conference (ERN) in STEM selects top student researchers to present groundbreaking projects, with the goal of advancing their abilities to effectively communicate in the science community and ultimately their future careers. Two Mizzou Engineers were among the high-caliber students selected.

Civil and Environmental Engineering’s Amber Peterein and Laura Wiseman each earned admission to the for their water management research. While Peterein and Wiseman submitted separate research, each earned an all-expense-paid opportunity to present at the conference from Feb. 21-23 in Washington D.C.

Peterein has always had a passion for water ever since she was a child and decided to incorporate it into her love for engineering. Her research studies how to improve the efficiency of drinking water treatment for smaller communities.

“They have a really hard time optimizing their systems because the traditional clarifier does a lot better when it runs 24 hours a day with minimal interruptions to service. And if they continue to produce, it doesn’t benefit anybody,” she said. “It starts causing more harm than good, so they shut down operations. So what I am focusing on is seeing how well you can optimize that startup and shutdown process.”

Using the design of the ClariCone Clarifier, a funnel-shaped container that uses gravity to filter out waste materials created by the water treatment process, Peterein was able to determine how productive the system is.

“It has the potential to help a lot of people and help out a lot of smaller communities. So that’s kind of the other driving factor. The more people I can reach out and help the better,” Peterein said.

Wiseman won her grant to ERN for her work monitoring a local stormwater level spreader here in Columbia to see if similar systems can be used elsewhere. She has been running this research since starting her graduate studies last and was able to incorporate it into her work.

“I take measurements of soil water content, water level within the level spreader and climate and put them together to get a picture of how the site is working,” Wiseman said. “I hope that during [the] analysis of my data and creation of the models, I can get results that are useful for future implementation of level spreaders for stormwater.”

Peterein and Wiseman both see receiving this high honor as indicators of their growth professionally and personally.

“[I am] very excited that I am able to go to a national conference, and also grateful that I will be receiving assistance to get there,” Wiseman said. “ERN will be the largest conference I have presented at so far, and for me personally, it will represent how far my presentation skills have improved since I began my graduate studies.”

For Peterein, it took some time to sink in.

“I got that acceptance letter, and it was about a month later when I was home over Christmas break, that it hit me. Not only have I earned this position, [but] I have worked incredibly hard to get there,” she said. “It was definitely an affirmation of all of the hard work that I’ve done.”