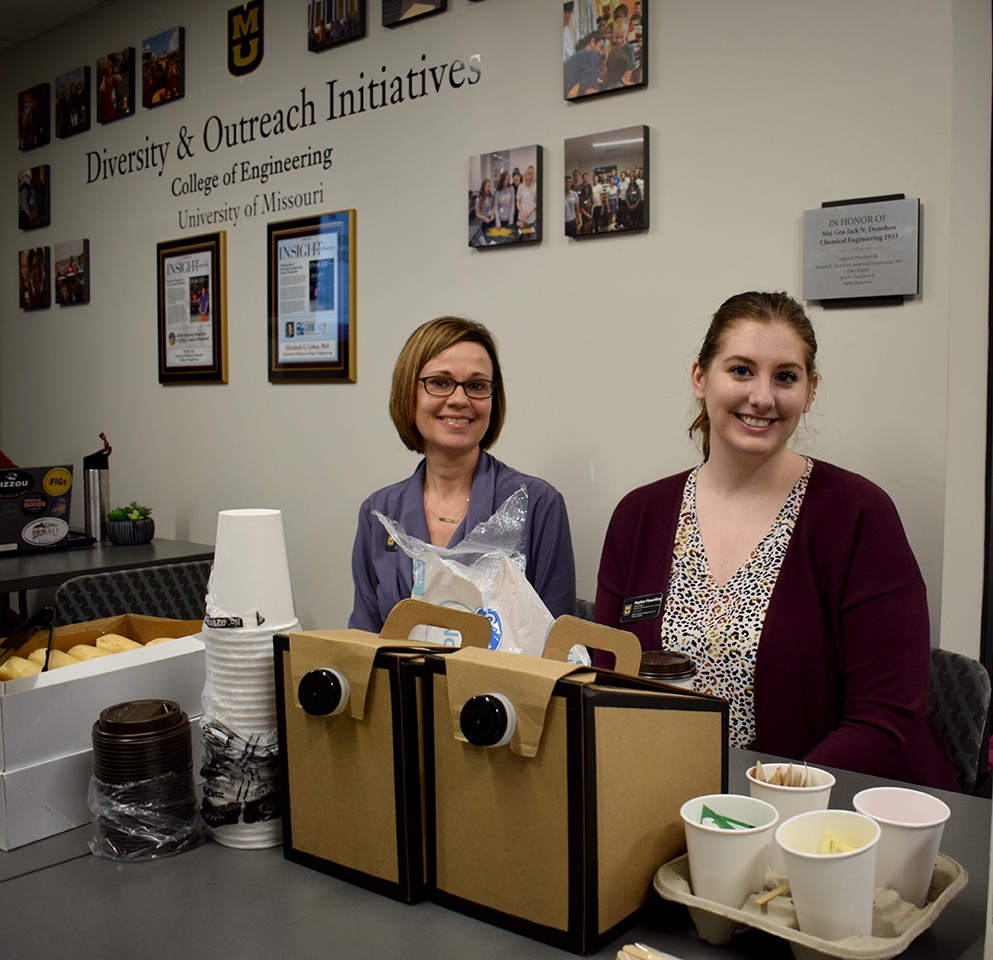 Lisa Crader and Peyton Flewelling at the Coffee with RSVP (Relationship & Sexual Violence Prevention) Center Advocates, one of the WIE Week events that the College hosted on Wednesday.

The MU College of Engineering is a welcoming, inclusive college, and that message was the theme and the focus of Women in Engineering (WIE) Week, Feb. 17 – 21. Events got underway Feb. 17 with a kick-off social in Lafferre Hall, where Mizzou Engineering students had an opportunity to meet with the leaders of several student organizations that are co-sponsoring WIE Week this semester. Hilary Mueller, the director of Diversity and Outreach Initiatives in the College, says WIE Week is held each semester to empower and support women in engineering and to continue to “shine a light” on increasing diversity, inclusivity and equity within the College.

“WIE Week celebrates and supports the women engineers we have, it encourages advocates and allies, and it asks us to think about why there is a gender disparity in STEM and what we can do to fix it,” Mueller said. She said she is excited since this is the first semester that student organizations are working to collaborate with WIE Week.

Sophie Nedelco, a senior majoring in computer science, is president of DevelopHER, one of the sponsoring organizations that advocates for women and underrepresented genders in computing.

“Each of these organizations advocates for women in the College, so it’s appropriate for us to sponsor WIE Week, but it’s also important to put our name out there to attract new members,” she said. “We have members in computer science and information technology and a few electrical engineers.” 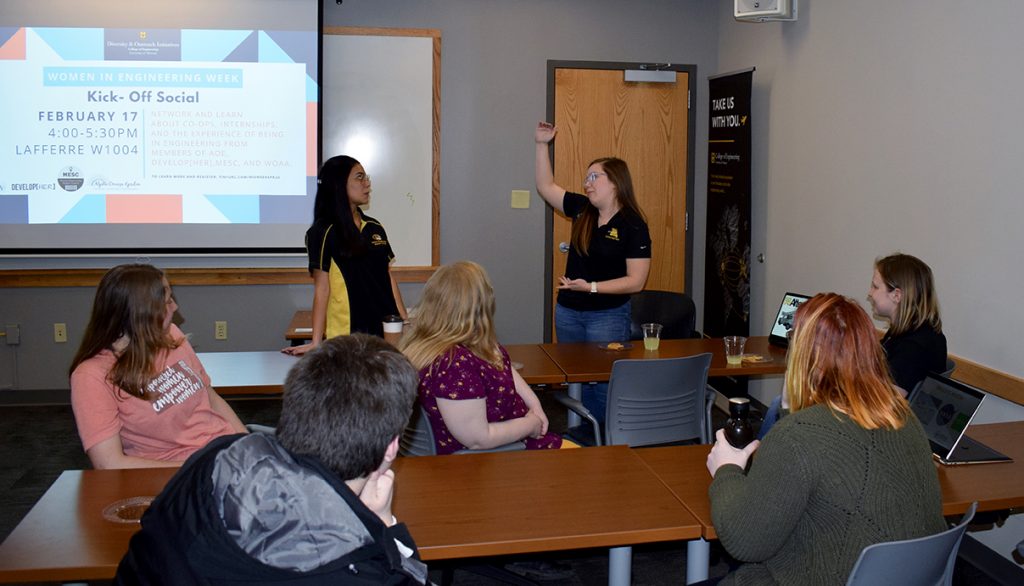 Alpha Omega Epsilon (AOE) is a professional engineering sorority and one of the sponsors of WIE Week. Member Kiersten York, a senior in mechanical engineering who graduates in May, said AOE brought a special guest speaker to campus to talk to students about navigating job offers.

“Amy Jewell got her MBA from Washington University and she is a non-engineering major,” York said. “Our idea was to find somebody who is not an engineer because engineers tend to take the first offer they get. I’ve read that not only are women more likely to accept their first offer, they are less likely than men to negotiate.”

Jewell, who has experience with for-profit companies, non-profit organizations and operated her own business, talked to Mizzou Engineering students about how to evaluate and negotiate various job offers.

Mueller says her office hosted a Student Feed Forward session during WIE Week to give students a chance to offer feedback.

“We invited all students to Lafferre Hall to talk to me about their thoughts and feedback about diversity, equity and inclusion in the College—so, strengths, weaknesses or concerns, and it’s confidential,” she said.

Another session was new this year: an informal coffee with representatives of the Relationship & Sexual Violence Prevention (RSVP) Center. Mueller says the event offers students, staff and faculty a chance to learn about the RSVP Center and what it has to offer so people will feel more comfortable utilizing their services.

“We just want to encourage women to continue in the major they have picked and not to feel scared,” she said. “This week is about empowerment and finding peers in your major and networking.”

The culmination of WIE Week is the Cultural Immersion Lunch; this semester WIE Week organizers collaborated with the National Society of Black Engineers (NSBE) to host a Celebration of Black Women in Engineering. (We’ll have details of this exciting event soon.)

York said one goal of WIE Week is to help students become more comfortable in the engineering environment.

“We want students to know there are others who feel like they do and that there are resources available to them,” she said.

The other sponsoring student organization of WIE Week this semester was Women in Aeronautics and Astronautics, which recently started a chapter on the MU campus.