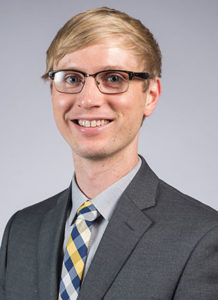 “I am truly honored to receive this award,” Young said. “Many people all over the world are doing great work in this field, and I am appreciative of the recognition for my contributions.”

Young is being recognized for his work in thin film coating development. Young’s research group uses a technique called “atomic layer deposition” (ALD) to control matter at an atomic scale. Using this technique, researchers can position atoms in the precise location desired within a thin film to maximize that material’s capabilities.

An example of an advancement enabled by thin film coatings is in computer hardware, which can now support machine learning and artificial intelligence.

Young’s work in ALD thin films has gone beyond computer hardware. It has helped lead to advances in electrochemical performance and energy storage.

“I was drawn to thin film research because I saw the potential for thin or ultrathin coatings – similar to those used in fabricating computer electronics – to be used to address other critical challenges facing society. For example, improving energy storage and water treatment technologies,” Young said.

To be eligible for this award, the winner must have earned a doctorate or equivalent degree fewer than seven years prior to January 1 of the award year. The awardee must have “contributed outstanding theoretical and experimental work” in the field of thin film research, according to the organization’s website.

“I was excited by Mizzou’s plans to expand in materials research. I wanted to be part of the energetic environment and help contribute to the future of Mizzou,” Young said.

Funding for Young’s research has come from the United States Geological Survey and the Missouri Water Resource Research Center. He also has received the Dr. Richard Wallace Faculty Incentive Grant from the Mizzou Alumni Association.

Learn more about the Mizzou Thin Film Coatings and Materials Electrochemistry Lab and the work being conducted by graduate and undergraduate research students.