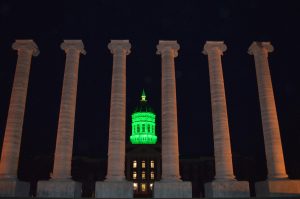 Engineers’ Week, the annual celebration of St. Patrick the engineer, is a significant marker of Mizzou Engineering’s 150-year history. Now celebrated at colleges across the country, the event originated in 1903 at the University of Missouri.

On March 17, 1903, a mysterious announcement posted to the bulletin board in the Engineering Building proclaimed, “St. Patrick was an engineer. Holiday today.” Engineering students, who at that time were in classes six days a week, happily heeded the note and skipped classes that day.

In 1904, both juniors and seniors skipped classes on March 17, and in 1905, students celebrated the holiday with festivities such as lab exhibits, the kowtow and the dance, which are still held during Engineers’ Week today.

In 1906, the Blarney Stone was discovered during excavations of the Engineering Annex Building. The stone, which was unearthed during the excavation, was etched with a message in an ancient

language. The message was translated to read “Erin Go Bragh,” an anglicized version of an Irish language phrase meaning, “Ireland forever.” However, the engineers translated the phrase as “St. Patrick was an engineer.” The Blarney Stone has remained an integral part of Engineers’ Week at Mizzou.

The 1906 celebration also marked the inception of The Shamrock, a Mizzou Engineering publication that began as a commemorative booklet for the St. Patrick activities. In 1914, The Shamrock transitioned into a yearbook, and in 1933, it became a student bulletin and magazine, last published in the 1990s.

The shamrock became a symbol for Mizzou engineers and is enshrined on the Shamrock Plaza and Medallion, originally constructed 1921 and restored in 2019. According to engineering lore, anyone who walks across the shamrock is destined to marry an engineer.

The St. Patrick festivities have grown to a week-long celebration for the College. What began as a stunt, the lighting of Jesse Dome green kicks off Engineers’ Week. Throughout the week, engineering students participate in the Road Rally, a driving scavenger hunt through downtown Columbia; the 5K/10K Run/Walk for Habitat for Humanity; the Hot Dog Banquet; the Skits and BBQ at the Heidelberg; Lab Exhibits for local high school students; the Knighting Ceremony and Grand Kowtow; the Ada Wilson Green Tea Lecture that celebrates the first female engineering graduate; and the St. Patrick’s Ball, where the King and Queen of St. Patrick are crowned.

Knighthood is bestowed on any senior engineering student who kneels to kiss the Blarney Stone before St. Patrick. Throughout the years, St. Patrick has conferred honorary knighthood to professors, alumni and other prominent figures. 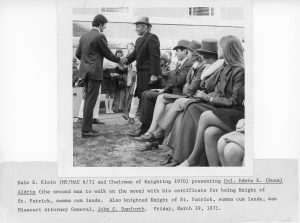 Buzz Aldrin at the 1971 Knighting Ceremony.

The first honorary Knight of St. Patrick was Professor Arthur M. Green in 1907. Green was a former Junior Dean of the School of Engineering and was the head of mechanical engineering.

In 1934, 11 years before he would serve as president, Harry Truman was given honorary Knighthood at the College of Engineering. At the time, he was the presiding judge of

Edwin “Buzz” Aldrin, the second man to walk on the moon, was knighted in 1971.

Now, alumni who receive the College’s prestigious awards receive the honorary knighthood upon their return to campus during Engineers’ Week.

Learn more about E-Week and the 150th Anniversary.