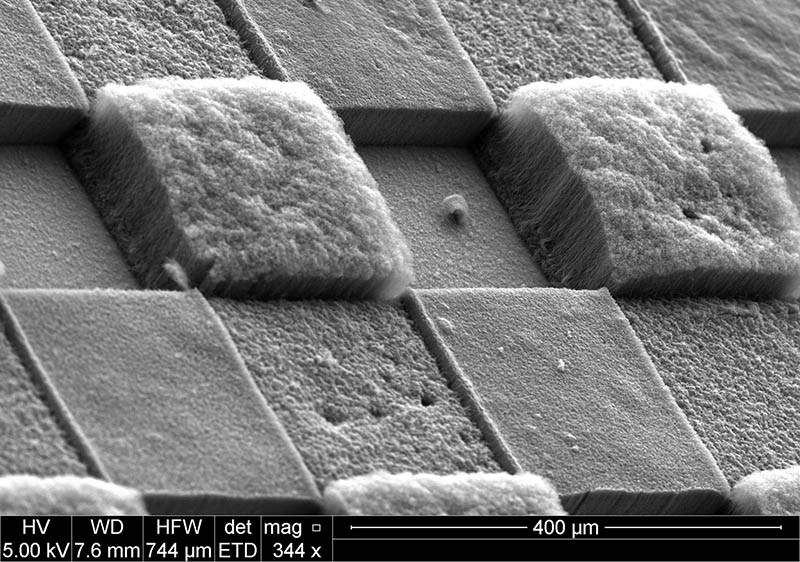 CNT pillars of different heights and arranged in a checkerboard pattern. Similar carbon nanotube pillar structures are used in this project, which aims to reduce the cost of building particle accelerators.

The Large Hadron Collider — the world’s most powerful particle accelerator that came back online last month — cost some $4.75 billion to build in 2012. Now, it’s reported that the CERN Lab in Switzerland plans to start construction on a new super-collider by 2035 at a cost of $23 billion.

If Mizzou Engineers are successful, that price tag could drop dramatically. Furthermore, smaller particle accelerators could be more easily manufactured for medical and commercial applications. 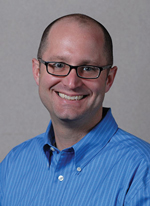 Particle accelerators are machines that speed up charged particles, allowing researchers to gather information about atoms and molecules. One reason they’re so expensive is that they have to be hand crafted, said Scott Kovaleski, professor of electrical engineering and computer science. Additionally, they use radiofrequency generators, which require pricey sources of electrons.

“If we can move to carbon nanotubes, the manufacturing process starts to look like it does for semiconductors and computers, which obviously have gotten cheaper over time,” Kovaleski said. “If we can make those carbon sources of electrons a viable, useful thing, it opens up this opportunity to proliferate that technology and make it more available and more capable.”

But first, researchers will need to figure out how to grow the perfect carbon nanotube configuration for the job. Scientists know how to make CNTs in the lab, but they’ve not yet figured out how to control their properties and behaviors when they grow in mass quantities. 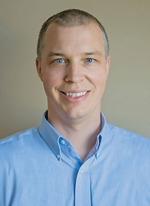 That’s where Maschmann comes in. In his laboratory and using instruments in the Materials Characterization and Fabrication facility, part of the MU Materials Science & Engineering Institute (MUMSEI), Maschmann is using both simulated and physical environments to determine what properties a CNT would need to have to best work for radiofrequency generators.

“The whole idea is that we want to generate devices that emit electrons,” said Maschmann, co-director of MUMSEI. “In order to do that, you apply a high electric field, high enough to extract electrons from the materials. One of the benefits of CNTs in particular is there is a geometric effect to pulling electrons off of materials. CNTs are very narrow in diameter, and that actually causes a localized electric field enhancement, making it easier to draw electrons off of them.”

By looking at CNT growth in both physical and simulated space, the team can experiment with different characteristics more easily, without having to go through physical tests each time. That’s important because the team isn’t sure yet exactly what properties a CNT needs to possess to best serve this purpose.

“There’s a lot of physics and modeling that need to happen,” Maschmann said. “We want to make them as efficient as possible with respect to electron emission — so high current, low voltage.”

Kovaleski will test Maschmann’s CNT samples in an experimental environment to identify the parameters that best perform. Then, partners at Stanford Linear Accelerator Center will test them in the field.

The team outlined the project at the IEEE International Conference on Plasma Science this spring.

Be part of an engineering program finding world-changing solutions. Become a Mizzou Engineer!