Tones like the sandy landscapes in the 2021 Oscar nominee “Dune” are used to evoke emotions in viewers.

When you think of the 2022 Oscar nominee “West Side Story,” you might envision the vibrant red and gold costumes. Think of “Dune,” however, and you’ll see sandy tones and muted landscapes. 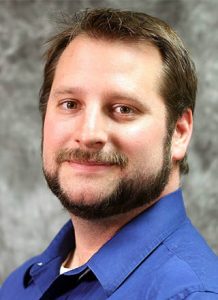 Color palettes in movies are carefully selected to invoke feelings and responses from audiences. But just how do humans process those palettes? Turns out, it’s pretty arbitrary, preliminary research from Mizzou Engineering shows.

Brian Maurer, director of the Information Technology Program, is studying how the human brain interprets colors in films. Last year, he and his students analyzed pixels from every frame of films that earned best cinematography recognition at the Oscars. Using one of campus’s supercomputers and high-powered graphic processing units, they determined the mathematical mean of colors from each scene, as well as identified the top 10 colors of the frame based on pixel count.

The majority selected the arbitrary palette.

While Maurer stresses that the work is in early stages, he said it indicates that humans don’t necessarily pick up on mathematical or analytical cues inside color schemes but rather search for other patterns.

“If you think about hunters in a frozen field of ice and snow, variations of white should be the color palate,” he said. “But if there’s a fire in the distance, they would see that because it’s a deviation. In film, do we utilize those evolutionary instincts in terms of deviation of color in certain ways that provide us with some sort of inherit information? That’s the theory.”

Drawing any firm conclusions would require analyzing a much larger data set. Maurer said the research could also span into more specific questions such as differences in film tones based on decades. Movies in the 80s for instance, reflected national optimism with bright pops of color while many films today reflect the darker tone of the nation’s sentiment.

“Are there cultural elements that subconsciously alter the color palette artists use, and if so, why?” Maurer asked. “How does war, economic downturn or interest in heightened intellectualism affect a culture’s art? Can you look at films as a function of generations, break down their color schemes, and attribute them to something unique other than the individual artist? We know artists do it; the question is how are we doing it and why. Is there a marriage between science and art that results in something beautiful? Or something else? We don’t know yet.”

“We have a relatively small data set,” he said. “But if we were to take 10,000 randomly selected but notable photographs and the same patterns start to emerge, we can get a better understanding of how we process color schemes to inform decisions around media creation.”

Be part of undergraduate research around media technology and design. Study information technology at Mizzou Engineering.