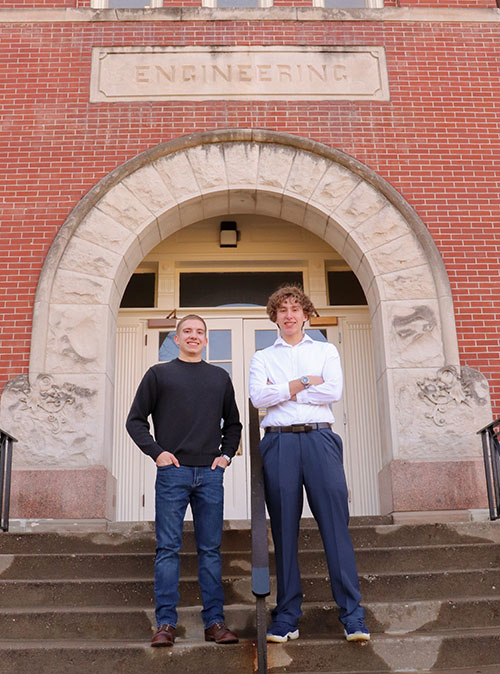 A freshman pre-engineering student is among 10 Mizzou student teams competing at this year’s Entrepreneur Quest (EQ). Sam O’Neill, along with collaborator Kobe Messick, a freshman in the College of Education & Human Development, plan to pitch their idea for Supersole, a business that makes 3D printed custom shoe insoles, at the final competition on Tuesday, March 22.

EQ, a signature program of the Griggs Innovators Nexus in the MU Student Center, provides resources to help student entrepreneurs. The competition comes with a $30,000 prize pool for the top three winners.

For O’Neill and Messick, the competition provided an opportunity to resurrect an idea they had worked on together in high school. As part of an engineering class at Van Horn High School in Independence, Missouri, the two developed a business plan to make orthotic insoles using 3D printing. The insoles, which can be customized to a person’s feet and needs, are made from thermoplastic polyurethane, a filament that has soft, rubber-like features.

Both students have experienced foot pain first-hand. O’Neill is a hiker who is in the National Guard, and Messick played baseball. Both have worked in restaurants on their feet for long periods of time.

“When you’re always on your feet, foot pain is a problem you’re used to experiencing, and we didn’t see a great solution,” O’Neill said. “You either have to buy expensive orthotics or cheap insoles that don’t do that much.”

After graduation, O’Neill and Messick were busy with work and other obligations, and they put their idea on the back burner. The two — along with two other friends from Independence — chose Mizzou because they wanted to attend a university together that offered high-quality programs. Three of the group are engineering majors.

“We all heard really good things about the Mizzou Engineering program,” said O’Neill, who is leaning toward a civil engineering degree.

Last semester, Messick saw a promotion of the EQ pitch competition and noticed it was open to anyone. That’s when he and Messick decided to revisit their insole idea.

“If you look at the EQ participants, you’ll see several different majors represented,” Messick said. “It’s very diverse, and I am really impressed with how inclusive they are. Sam and my skillsets work really well together. I’ve been on the marketing side of things, and he’s been the smart guy behind the computer.”

That combination has worked out for the team.  After making it through the first round, they pitched Supersole to professional judges and a campus audience at the Shack last semester and made it to the final round.

“We’ve met with Ms. Gray, the legal clinic and other resources that were completely free of charge,” Messick said. “We’ve been able to use this to help smooth our transition to college. EQ has really helped us settle in. We’re really grateful for the people behind the EQ and what they do for us. Shout out to Mr. Greg Bier and Ms. Kelly Mattas; they’ve been really good to us.”

Want an engineering education that gives you entrepreneurial opportunities? Become a Mizzou Engineer!