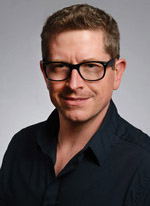 Christopher “Chip” Gubera has over 15 years of experience teaching media technology and design for the IT Program at the University of Missouri. He spends most of his teaching time in the classroom, he has been teaching online since 2015. From time to time, he also does freelance in motion graphics, visual effects and music for feature films and network television. He is also an independent filmmaker. In the last 25 years, he has written, directed and/or produced eight feature films and over 30 short films, 19 of which have been accepted at film festivals around the world. Twelve of these films have won awards at festivals worldwide and seven have had distribution. The many awards and nominations include a Mid-American Emmy nomination for his documentary feature “Joplin, Missouri – A Tornado Story” (2012). His other feature films include “Song of the Dead” (2005), “Academy of Doom” (2007), “Mil Mascaras Vs. The Aztec Mummy” (2007), “In the Wake of Ire” (2018), and “The Lost Treasure of Jesse James” (2020). In 2016, his multi-award-winning feature film “Slasher.com” was released worldwide on DVD, VOD, and is currently available for viewing on Amazon Prime Video. His next feature film that he is producing is the kid’s film “Shakespeare’s Mummy.” It will be released in 2022.