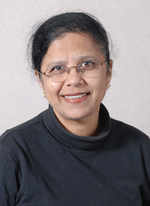 Shubhra Gangopadhyay is the Cramer W. LaPierre Endowed Chair in the Department of Electrical Engineering and Computer Science at the University of Missouri. For the academic year 2021-22, Gangopadhyay was been named a Faculty Fellow in the College of Engineering to lead the effort of a campus-wide Materials Institute and develop interdisciplinary materials research. Gangopadhyay was the director of the MU International Center for Nano/Micro Systems and Nanotechnology, which researched and developed miniaturized systems integrated with novel nanomaterials during 2004-2021. Her research has been extensively funded by the National Science Foundation, the Department of Defense, the National Institutes of Health and several companies including Boeing, Texas Instruments, IBM, Sematech, Biorad and Global Goods, In 2003, Gangopadhyay became a Fellow of the American Physical Society for her seminal work on amorphous carbon-based materials, In 2008, she was a Nano 50 award recipient for the invention of nano-engineered thermites and applications. Gangopadhyay became a Fellow of the American Institute of Medical and Bilogical Engineering and a Fellow of National Academic of Inventors for her discovery on plasmonic gratings diagnositics device and gene/drug delivery micro-device system. She was a visiting professor at the Universität Kaiserslautern in 1991. Gangopadhyay was a Program Director at the Electrical, Communication and Cyber Security division of the National Science Foundation during 2016 to 2020. Dr. Gangopadhyay serves as a faculty mentor for various federal research proposals.