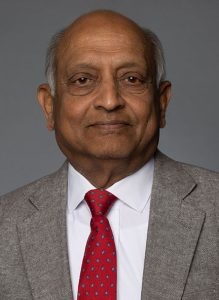 Vellore S. Gopalaratnam is a Fellow of the American Concrete Institute (ACI) and is a registered Professional Engineer in Missouri. He has also been active in other professional organizations, including the American Society of Civil Engineers, American Academy of Mechanics, Society of Experimental Mechanics and the Materials Research Society. He has previously served as the chair of the ACI Fracture Mechanics Committee and secretary of the ACI Fiber Reinforced Concrete Committee. Gopalaratnam has served as a visiting professor at Tohoku University in Sendai, Japan, Universitat Politecnica de Catalunya in Barcelona, Spain, the Indian Institute of Technology-Madras in Chennai, India and Amrita University in Coimbatore, India.

As a Fulbright Specialist (at Amrita University) and a Fulbright-Nehru Scholar (at IIT-Madras), he has been actively engaged in research on widespread implementation of precast prestressed concrete technologies for housing and infrastructure applications in India. He is the coordinator of the minor in engineering sustainability at Mizzou and serves as the director of the CEE STEM Scholars’ Program, a project funded by the U.S. National Science Foundation.

His research interests include sustainable materials and infrastructure, prestressed concrete, high performance and fiber reinforced cement composites, polymer concretes, experimental mechanics, performance evaluation of bridges and field instrumentation and monitoring of structures. He has published extensively in international journals and made numerous invited presentations at international meetings on these topics.