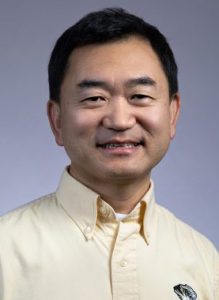 Yi Shang is a professor, the Robert H. Buescher Faculty Fellow and director of graduate studies in the Department of Electrical Engineering and Computer Science at the University of Missouri in Columbia, Missouri. He received his PhD in computer science from the University of Illinois at Urbana-Champaign in 1997, MS from the Institute of Computing Technology, Chinese Academy of Sciences, Beijing, in 1991, and BS from the University of Science and Technology of China, Hefei, in 1988. Previously, he worked as a senior researcher at the Xerox Palo Alto Research Center (PARC) in Palo Alto, California. He has published over 200 refereed papers in the fields of artificial intelligence, wireless sensor networks, mobile and distributed computing, and bioinformatics, and received six U.S. patents. His papers have been widely cited, with one first-author paper cited 1,800 times. He has been featured among the World’s Top 2% Scientists List, according to a Stanford University study in 2020. At MU, he has supervised more than 80 graduate students and over 70 undergraduate researchers. His research has been supported by grants from many funding sources, including the NSF, NIH, U.S. Army, DARPA, Missouri Department of Conservation, Microsoft, Raytheon, etc. He has co-founded a start-up company, TigerAware LLC. He is a lifetime member of ACM and Senior Member of IEEE.