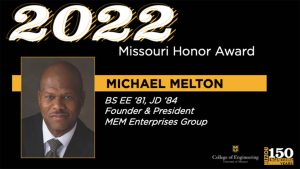 Michael Melton, Esquire, BS EE ’81, JD ’84, has received the 2022 Missouri Honor Award recognizing his outstanding contributions to Mizzou Engineering and extraordinary efforts to help support students and young alumni. The award is the highest accolade bestowed on an engineering graduate.

“I’m honored by this,” Melton said. “I am very pleased and happy that the things I do with the University and outside of the University have been recognized.”

Melton is an “extraordinary example illustrating how a great engineering education can lay the foundation for a remarkable professional and business career,” his nominator said.

That career includes working as a registered patent attorney before starting his own company. Today, Melton is Founder and President of MEM Enterprises Group, which owns, operates and manages Taco Bell and Five Guys Burgers restaurants and commercial real estate. The portfolio of Taco Bell restaurants is the largest owned by an exclusively African American group, and the Five Guys portfolio includes the top two highest grossing locations in the United States.

And he couldn’t have done any of it without Mizzou Engineering, Melton said.

“The engineering degree is probably the foundation of why I’m successful, and I really appreciate it,” he said. “It was the most difficult achievement I ever had to go through.”

Melton said he was “ill-prepared” for engineering when he started at Mizzou but worked hard — often sacrificing typical college experiences — to be successful knowing it would open career doors. Other than business, engineering is the top degree held by CEOs of Fortune 500 companies.

After earning a bachelor’s from Mizzou Engineering, the University of Missouri School of Law contacted him about considering a law degree. After doing some research and learning more about patent law, he completed a JD, passing both the bar and obtaining registration to practice before the U.S. Patent and Trademark Office.

The combination of a technical education and law school proved invaluable.

“At Mizzou, they taught you how to learn about engineering, technology, research and development and how to work with that,” he said. “That was really important in being a patent attorney. You have to be able to converse with inventors and talk with them about their invention in order to document it legally in the form of a patent. I had a deeper curiosity that helped write that patent well. I would ask them to explain how it worked and why it worked so I could think of variations of it and envision the future. That really became the secret of my success in corporate America.”

Engineering also prepared him to make a case to lenders when he was ready to start his own company, stressing that his management, organizational and critical thinking skills would make up for any lack of restaurant experience.

Today, he continues to use the lessons he learned at Mizzou Engineering.

“Really knowing how to dig into the nuisances of what’s going on with the business, with banks, getting opinions from others — that inquisitiveness has been a big part of my success,” he said.

Melton has given back to Mizzou Engineering immensely over the years. He is a member of the Dean’s Advisory Council, the Inclusivity, Diversity and Equity Alumni Advisory Council and has spoken at events such as Commencement. He has also served on numerous national boards.

“I get involved in a variety of organizations,” he said. “I care about that and really care because people helped me, whether it was a little bit of finances or motivational speeches or just someone to talk to from time to time. I believe people can motivate you in ways they don’t realize. I don’t believe I got here where I am all on my own. That’s why I give back.”