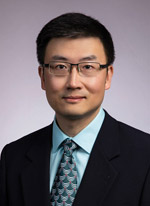 Landing a spacecraft on Mars isn’t an easy feat. According to NASA, only about 40 percent of all Mars missions have succeeded, because it requires a vehicle to go from 12,500 miles per hour to zero in a short amount of time while adjusting for heat, pressure and other constraints. Now, a Mizzou Engineer is proposing a new landing strategy that could be more efficient and effective than current methods.

Ming Xin, professor of mechanical and aerospace engineering, designed a guidance law to be computationally more efficient and more precise. His design is based on the range of a spacecraft’s entry trajectory rather than on traditional variables such as time and energy.

“The mission is the same: to get the spacecraft to Mars safely and efficiently, but we use a very different approach,” Xin said. “Here, we are using range as the independent variable to propagate the dynamics more accurately and solve the trajectory optimization problem more easily.”

Xin and co-authors published this new guidance law in the Journal of Guidance, Control, and Dynamics, a premier journal in American Institute of Aeronautics and Astronautics (AIAA).

In the paper, the team also simplified a challenging optimization problem by reformulating it into a series of sub-problems that can be solved with a programming algorithm.

“We found we can easily convert what we call a non-convex process into an easily solved convex problem,” he said.

Xin is an expert on guidance laws. Last year, he published a review paper comparing the five most popular strategies for planetary landings and concluded that each comes with pros and cons. He also published several papers in AIAA Journal of Guidance, Control and Dynamics proposing new guidance laws for missile defense technologies.