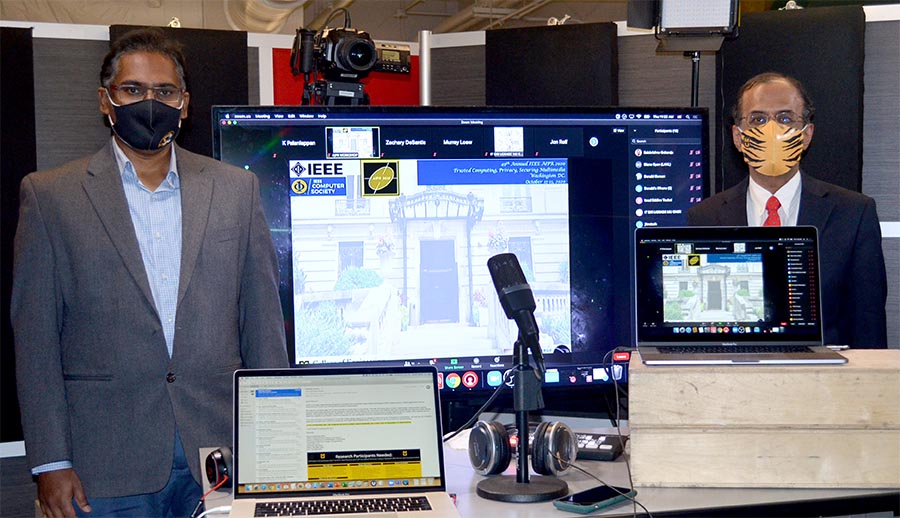 EECS faculty members Prasad Calyam and
Kannappan Palaniappan co-hosted this year’s AIRP Conference, using the new IDE Lab on campus. The event has historically been held at the Cosmos Club in Washington, D.C., pictured on the monitor.

AIPR is one of the longest-running conferences under the umbrella of the Institute of Electrical and Electronics Engineers. It has historically been held at the Cosmos Club in Washington, D.C., but organizers were forced to move it online this year in light of COVID-19.

Two faculty members from the Department of Electrical Engineering and Computer Science co-hosted the event from the new Interactive Digital Environments (IDE) Lab on campus. And participants agreed it did not disappoint.

“What we were able to do is maintain a degree of interaction with each presenter hosting a live Q&A,” said Professor Kannappan Palaniappan, chair of the conference. “It was a good approach to creating a successful virtual livestreamed technical conference that enabled the AIPR community to meet, interact and exchange ideas. The virtual poster sessions using online breakout rooms enabled one-to-one communication that was quite successful.”

Nearly 150 researchers and scientists from across the globe attended the AIPR. That’s more than usual, as the Cosmos Club holds around 80, said Palaniappan, who has been on the AIPR program committee since 2014 serving as Program Chair in 2016 and 2018.

While he looks forward to the conference returning to the nation’s capital, Loew said he hopes Mizzou Engineering can continue to be a virtual hub for future events.

“I’m hoping it will be back in D.C. next year, but I recommend we make it hybrid,” said Loew, who has been involved in AIPR since the 1990s. “The thing that made it run so well is that the technical details were handled beautifully by the Mizzou team.”

The IDE Lab is run by Brian Maurer, director of undergraduate studies for the Information Technology Program. A team of three IT seniors, Persephone Gloeckner-Suits, Jessica Weinberg and Kyle Shearrer, helped facilitate the conference. They provided continuous production support all three days as well as improving the professional quality of the keynote videos.

“The video processing and streaming help from the IDE Lab made this really unique,” said EECS Associate Professor Prasad Calyam, who served as Program Chair. “It removed all of the challenges of networking at the presenter locations and technical issues in handling video presentations. Overall, IDE Lab efforts made the entire conference content delivery more consistent.”

This year’s AIPR workshops and talks revolved around the theme of trusted computing, privacy and securing multimedia. There were talks on using AI to protect cyberphysical systems and IoT devices against cyberattacks and detecting deepfakes in multimedia. There was also a special panel session on the Future of Healthcare Policy and Regulation organized by Monica Weldon (moderator), Candace Lerman, Andrea Downing and Michael Mittelman discussing the privacy and security of electronic health records.

A key highlight from the two-day event was the debut of two new $20 million testbeds funded by the National Science Foundation.

Rudra Dutta, a professor at North Carolina State University, shared details of the Aerial Experimentation and Research Platform for Advanced Wireless (AERPAW) testbed in early design and construction that would enable advanced 5G wireless research experiments with a collection of drones. And Anita Nikolich, a research scientist at the University of Illinois Urbana-Champaign, detailed FABRIC, a unique research infrastructure that will enable cutting-edge, at-scale research around networking, cyber security, distributed computing and storage, machine learning and artificial intelligence.

“These testbeds are going to be valuable tools for future research for many of the conference participants who showcased state-of-the-art in emerging topics such as deep learning, artificial intelligence, computer vision and information authenticity,” Calyam said. “Most people run small experiments or simulations of their work that may never really translate to the reality of systems. So if you want to go in and test your method closer to reality, you have to go into a realistic testbed where other people can also run your experiment and use experiments at scale. Then you’re actually building solutions that are more realistic with both real users and scalable infrastructure. Such solutions developed on these testbeds also tend to have an easier pathway to commercialization.”

The conference also included a special session on “The Future of Healthcare Policy and Regulation in the Digital Age” organized by Monica Weldon, CoFounder and CEO of Bridge the Gap Foundation. The session focused on health care issues, privacy, policies and health data.