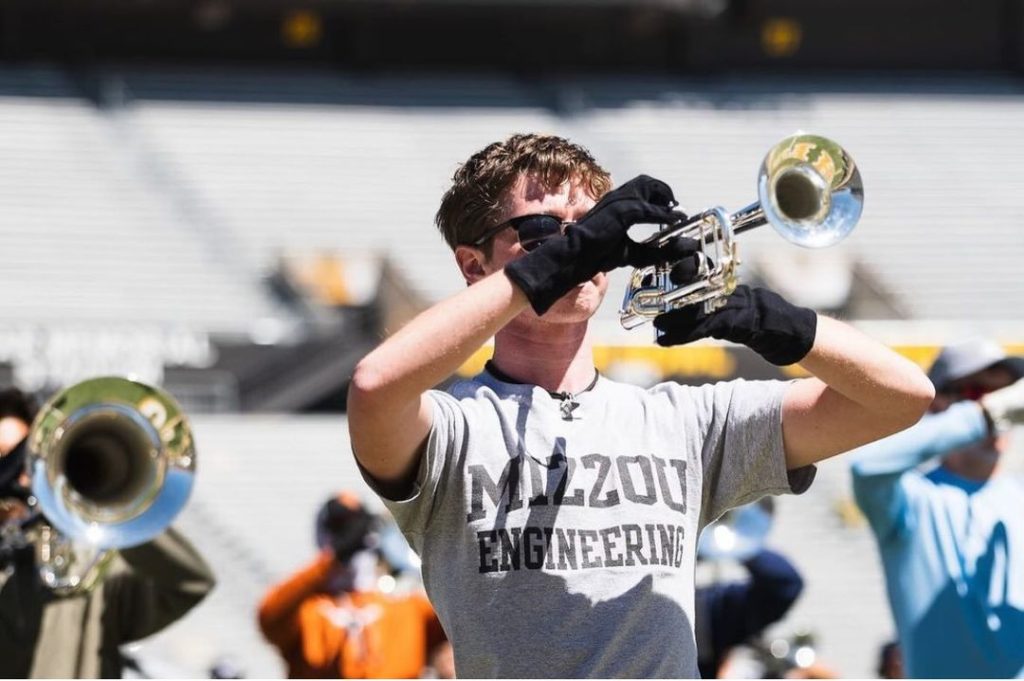 Mizzou Engineering Student Ryan Deloney marched with the Blue Devils Drum and Bugle Corps this summer. He is the trumpet section leader in Marching Mizzou.

Marching in one band takes time and dedication. Ryan Deloney marches in two.

Deloney spent his summer touring with the World-Champion Blue Devils Drum and Bugle Corps before returning to continue his mechanical engineering degree and play trumpet with Marching Mizzou this fall.

Deloney’s engineering education has always been tied to his love for marching band. After playing with Marching Mizzou while attending Moberly Area Community College, he transferred to Mizzou to stay with the band. He is now the trumpet section leader.

“I made a lot of friends here,” Deloney said. “There is also a lot to do here on campus.”

Deloney had many reasons for coming to Mizzou over other engineering schools in the state. In addition to having the opportunity to perform with Marching Mizzou, he also enjoyed the city of Columbia’s size and offerings and its distance from his home.

Deloney has had a passion for music and engineering since childhood.

“I’ve been a space enthusiast ever since I was a kid, and the design of rockets and spacecraft fascinates me,” he said. “I chose engineering because I want to contribute to the exploration of space.”

He started playing the trumpet in band during middle school and was driven to continue through high school and college.

Other than their early origins, Deloney separates his time as an engineer and a marching band member. While they can be difficult to balance, especially when he was auditioning to join the Blue Devils, he’s proven it’s possible to succeed at both.

“The Blue Devils are the best drum corps in the world, so every year they draw a lot of talent. If I actually wanted to make it, this wasn’t something I could put on the backburner and work on for a week in advance,” Deloney said. “I was grinding for that audition months in advance.”

Deloney put in hours of dedicated time and effort to maintaining his class performance and perfecting his audition.

“I’d say to myself, ‘I may want to relax today, but I have to get out to the practice field, I have to stay focused in class.’ There were days I’d spend 12 hours switching between doing homework or studying and practicing trumpet,” he said. “It was very taxing, mentally and physically.”

Deloney’s hard work paid off. He earned a coveted spot on the Blue Devils Drum and Bugle Corps and marched with them during the 2022 competition season performing the show, “Tempus Blue.” The Blue Devils won every competition they entered and took home the DCI World Championship title in August.

Putting in the effort to be a successful Mizzou Engineering student and world-class marching musician has changed Deloney’s outlook on life.

“There’s a saying, ‘how you do anything is how you do everything,’ and they really instill that into us at the Blue Devils,” he said. “That’s really been beneficial, and that’s something I’ll carry with me for the rest of my life… I have no doubt that I’ll figure out how to apply that to engineering.”

After this season, Deloney will age-out of drum corps eligibility.

Participating in professional drum corps and being a section leader in Marching Mizzou have helped Deloney develop confidence, leadership and communication skills. He has used those skills as he continues his mechanical engineering degree this fall.

Balancing engineering coursework with Marching Mizzou rehearsals and performances has kept him busy, but Deloney says he enjoys always having something to work on. He also encourages other engineering students to join a student organization on campus.

While it can be challenging to balance, joining an organization is worth it for the experiences, he said. “It’s very rewarding.”

“The professors here are high quality instructors, most always willing to help you outside of class.”

What started out as childhood dreams have turned into a successful marching career and fulfilling college experience for Deloney. Surrounded by like-minded people who share his passions, he is enjoying his journey as a Mizzou Engineer one step at a time.

Want to earn your engineering degree while pursuing your passion? Apply to Mizzou today!