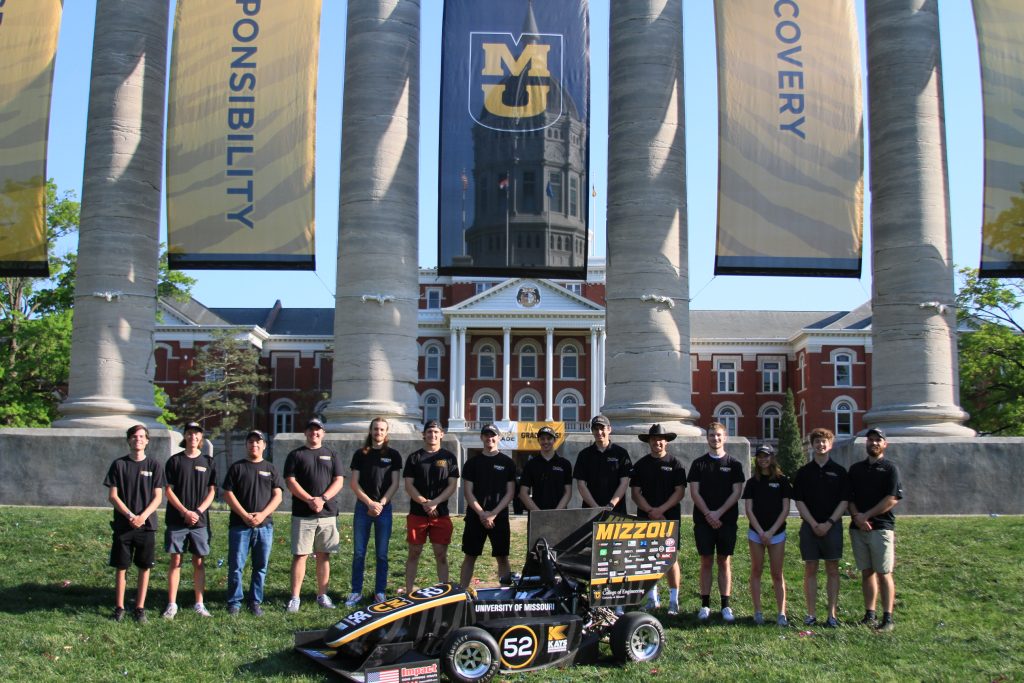 Mizzou Engineering’s formula car team has been speeding ahead of the competition, placing within the top 20 teams at two recent events, including at the Michigan International Speedway.

Mizzou’s formula team competes as a part of Formula SAE (FSAE), organized by SAE International. The car is quarter scale, meaning it’s about ¼ the size of a standard formula one vehicle. Students build on work from the previous year to build a more competitive vehicle.

“The 2021-2022 season saw a ton of improvement,” said Spencer Goldstein, a member of the FSAE team. “The team has been rebuilding from COVID and finally got into a position to be competitive again in 2022.”

Students on the team split up into groups to develop different systems on the car, such as the electronics, the frame, the suspension and the aerodynamics, said Robert Winholtz, an associate professor in mechanical and aerospace engineering and faculty advisor for the team.

“They spend a great deal of time designing and manufacturing components and integrating them together to produce the car,” Winholtz said.

The FSAE team first competed in May at the Michigan International Speedway, placing 19th out of roughly 100 teams. In June, they placed 14th out of 50 teams. They also placed within the top 6 in two distinct events in June, “which was pretty extraordinary for the team because the car had very little driving time on it,” Goldstein said.

Winholtz and Goldstein say that joining FSAE is a great way to get hands-on experience in engineering.

“It is an experience that cannot be replicated in the classroom,” Winholtz said. “In addition, they will have a chance to practice some soft skills like working in a team, time management, budgeting and others in a manner that you can’t replicate with coursework.”

“Joining an org is one of the best ways to make friends,” Goldstein said. “If you want real experience with your degree, especially things that would look good on a resume, join the team.”

Goldstein is also optimistic for next year’s competition.

“The season ended on a very high note,” he said. “We get a full year to tune the car that we took to the June competition to make it even better. Placing as highly we did means that next year with this car looks very promising.”