Guoliang Huang is the James C. Dowell Professor in the Department of Mechanical and Aerospace Engineering. Engineering

Stealth technology, the idea of reducing the ability of the enemy to detect an object, has driven advances in military research for decades. Today, aircraft, naval ships and submarines, missiles and satellites are often covered with radar-absorbent material, such as paint, to hide or cloak them from radar, sonar, infrared and other detection methods. A cloak is a coating material that makes an object indistinguishable from its surroundings or undetectable by external field measurements.

Guoliang Huang, the James C. Dowell Professor in the Department of Mechanical and Aerospace Engineering, said these types of cloaking materials are mature, in the technical sense, because the properties of acoustic (radar, sonar) and optical waves (infrared) are well-understood. However, Huang said little to no work has succeeded in solving the problem of cloaking for elastic waves in solid media, such as a seismic wave propagated through the ground. Recently, Huang, along with his former postdoc and students Assistant Professor Hussein Nassar and Research Assistant Professor Yangyang Chen, has designed and created a new metamaterial, an artificially structured material, that achieves “perfect” elastic material cloaking. 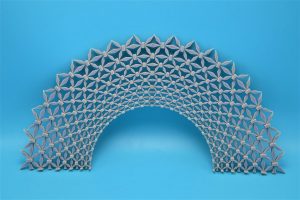 “This material is both theoretical and experimental—we created it in our lab,” Huang said. “We call it ‘polar material’ because we realized it has internal torque. We are the first to pr

opose the principles of this material and also the first to design and fabricate this material. The concept is, if you have an object you want to make invisible, you design some kind of coating material around the object so that when a wave hits the object, if passes around the material with no refraction.”

For example, a radar generates a radar wave, an acoustic wave, that refracts when it hits a submarine, making it visible. But if that sub is coating in a cloaking material, the radar wave will not refract and the sub cannot be detected.

“If you want to hide something in solid media, this is different,” Huang said. “In solid media, the wave is more complicated than the radar wave because in solid media we not only have a compression wave but we also have a shear wave. In civil engineering, we deal with earthquakes—seismic waves, which have longitudinal and shear waves, and most of the damage is cause by the shear wave.”

Huang said there is no natural material that satisfies the long-standing problem of transformation-invariance, wherein non-standard properties are needed after certain transformations. He said the ultimate purpose of his research is to model, design and fabricate materials that will fill in this “behavioral gap.” The new class of cloaking or polar materials his team created is composed of a functionally graded lattice embedded in an isotropic continuum background. The layers were 3D printed and manually assembled. 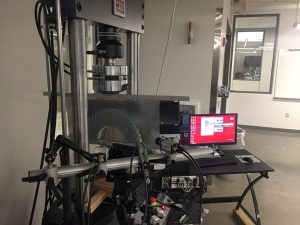 This is the experimental device Huang’s team used to test the characteristics of the polar material.

“We experimentally and numerically investigated the characteristics of the proposed cloak and found very good cloaking performance under both tension and shear loadings,” Huang wrote in his paper, one of two research papers Huang and his team had published by the Physical Review of Letters on the subject of polar materials.

In addition to protecting structures against seismic waves, Huang said another potential application of the new metamaterial would be suppressing vibrations on engines to reduce noise.

“Nobody has been able to design a perfect cloaking material in elastic media for 20 years, until we produced this new material,” Huang said. “For us, it is a fundamental breakthrough. We used 3D printing to make this material for easy lab demonstrations, but this principle could be used with any material. Metamaterial is a structured material—the properties are realized through the structure.”

Huang’s work is supported by a grant from the U.S. Army Research Office.

“The results that the University of Missouri team has recently published are encouraging,” said Dr. Dan Cole, program manager, Army Research Office, an element of the U.S. Army Combat Capabilities Development Command’s Army Research Laboratory. “This research could lead to new strategies for steering mechanical waves away from critical regions in solid objects, which could enable novel capabilities in soldier protection and maneuvers.”