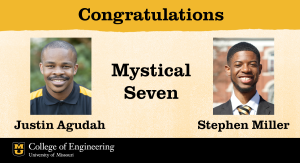 Congratulations to Justin and Stephen!

As the end of spring semester 2022 approaches, a Mizzou tradition once again takes center stage – Tap Day. This semester, two Engineers were selected, or “tapped,” to join the Mystical Seven honorary society at a ceremony in Jesse Auditorium.

Justin Agudah and Stephen Miller, both juniors in computer science, were chosen to become members of Mystical Seven, which is one of the oldest honor societies at Mizzou with a rich history of recognizing and promoting leadership, service, integrity and scholarship. Agudah and Miller are both executive board members of the Mizzou National Society of Black Engineers (NSBE). Congratulations, Justin and Stephen!

This year’s Tap Day marks the 95th edition of the event and is the 115th year of Mystical Seven. The six honorary societies – Omicron Delta Kappa, LSV, Mortar Board, QEBH, Rollins Society and Mystical Seven – recognize their new inductees’ service, leadership and commitment to the University of Missouri. Each society keeps the identity of their initiates secret until Tap Day. In addition, select faculty and staff who have significantly supported the university are also revealed during each society’s ceremony and are named “honor taps.”

To watch a replay of the entire ceremony, please visit the Tap Day web page here.