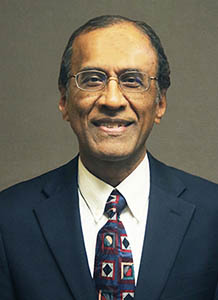 Mizzou Engineering’s Kannappan Palaniappan has been named a Curators’ Distinguished Professor, the highest honor bestowed by the University of Missouri System.

“I feel honored and proud,” Palaniappan said. “I see this as recognition for all of the world class faculty, researchers and incredibly talented students I’ve collaborated with over the years.”

Palaniappan is a Professor of Electrical Engineering and Computer Science. His groundbreaking work is in computational video analytics, including computer vision, deep learning, remote sensing, data visualization, high performance computing and biomedical imaging. He is director of the Computational Imaging and Visualization Analysis (CIVA) lab, which develops theory, algorithms, tools and software for visual scene perception and understanding across scale.

“Dr. Palaniappan is a highly acclaimed researcher whose interdisciplinary work has distinguished him from his peers,” Mizzou Engineering Dean Noah Manring said. “He has an internationally known record of research, leadership and service. He is very much deserving of this honor.”

What sets him apart are the far-reaching applications of his research. Palaniappan has helped develop systems and technologies to capture and build three-dimensional panoramic-style images and videos from drones and satellite imagery for defense, infrastructure mapping, smart cities, disaster response, autonomous systems and agricultural phenomics applications. He developed visual cloud computing with colleagues to optimize distributed video information processing in mobile systems. He’s worked with collaborators to search for ways to produce carbon nanotubes with desirable properties using machine learning. He developed plant root phenotyping software that could enable the development of crops that are more drought resistant and resilient to environmental and climate changes. With colleagues at NASA he produced spectacular Digital Earth visualizations including the BlueMarble global maps widely used today by search engines.

His work impacts health care, as well. He led a team that developed a top ranked deep learning network to identify, segment and track the lineage of cells in microcopy videos. He works with faculty at NextGen Precision Health to help interpret diagnostic information from medical images and scans. He has also worked with the National Institutes of Health and Oxford University to develop a two-stage deep learning architecture to diagnose malaria more accurately and effectively, as well as a computer assisted diagnostic system for tuberculosis diagnosis using chest x-ray clinical radiology images.

Palaniappan has received a number of awards, including the William T. Kemper Fellowship for Teaching Excellence in 2002, the highest teaching award given by MU reflecting his emphasis that research and teaching inspire each other. Palaniappan was awarded the NASA Public Service Medal for pioneering contributions to scientific visualization of petabyte-sized archives in 2001 and selected for the National Academies Jefferson Science Fellowship in 2013. Earlier this year, he was the inaugural recipient of the James C. Owens Excellence for Research Collaboration Award.

Visit Show Me Mizzou to see all of the Mizzou faculty members who were named Curators’ Distinguished Professors at the Sept. 7 Board of Curators meeting.