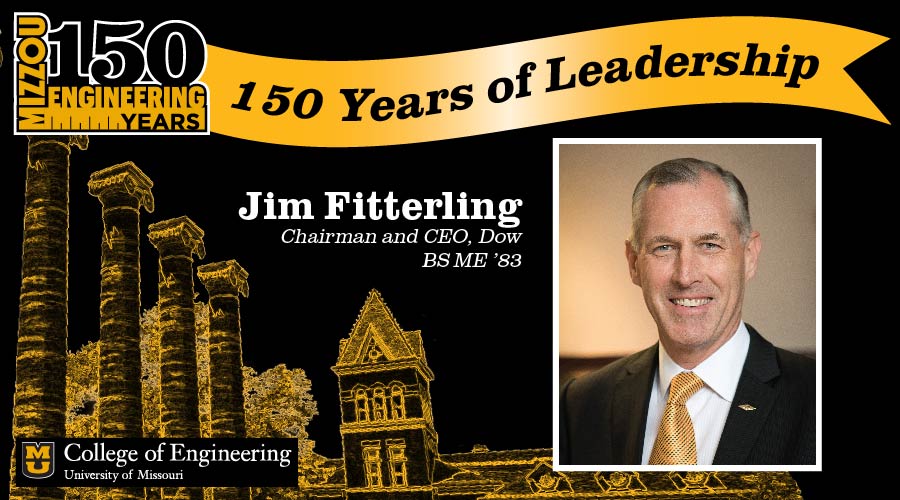 How do you run a $55 billion company, find innovative ways to reduce carbon emissions worldwide, advocate for LGBTQ rights, combat racial injustice and help Ukraine — all while helping ensure the next generation of engineers are prepared for the workforce?

We don’t know, but Jim Fitterling is doing it.

To grasp the extent of his role, consider Fitterling’s schedule. Last month, he spoke at two international conferences, after which his remarks made national headlines. He addressed attendees at the Catalyst Awards which honors working women. He ended the month among a small group of CEOs briefed by President Biden on the war in Ukraine.

A laundry list of accolades affirms his reputation as an active, inclusive leader on a mission to improve the world. In 2017, the American Institute of Chemical Engineers honored him with a “Doing a World of Good” medal. The following year, he landed at the top spot for LGBT+ executives on an “OUTstanding in Business” list. This year, he is No. 2 on a list of Top 40 Power Players ranked by Independent Chemical & Energy Market Intelligence.

So why does Fitterling take time to come to Mizzou Engineering and talk to freshmen considering careers in engineering?

“Without my education, I wouldn’t have gotten the job at Dow that’s led me to this position today,” he said during a recent visit to campus. “A lot of what happens in society today is driven by what’s happening in major cities and along the coast, and sometimes we overlook real gems. Mizzou is a real gem, and that story needs to be told.”

Fitterling’s Mizzou story began in the business school. That’s the beauty of the University of Missouri, Fitterling says; its original mission brought all disciplines to one campus, allowing students to explore interdisciplinary connections.

“People forget the origins of the University as the first land grant school west of the Mississippi,” he said. “It’s one of the reasons we have so many disciplines here: engineering, medicine, veterinary medicine, nursing, agriculture, journalism. The idea was you could come here and have access to everything. A lot of students don’t realize just how unique that is. It made going to school here interesting.”

Early on, Fitterling took advantage of extracurricular opportunities. He was a member of Marching Mizzou, involved in student government and joined a fraternity, where he learned about leadership and ultimately discovered engineering.

After talking to fraternity friends who were engineering majors, Fitterling switched from accounting to mechanical engineering.

“I’m glad I did because it really fit my personality,” he said. “I was curious about how things worked, curious about design. That’s what engineers do — solve problems and design or redesign things to be better. The College of Engineering gave me a great background to do that.”

Equipped with a Mizzou Engineering education, Fitterling got a job at Dow soon after graduation. His first job was selling products to industries requiring chemicals and treatments, which means he needed to be familiar with customers’ engineering systems and problems to recommend the right solutions.

About 10 years after joining the company, Fitterling had the opportunity to work in Hong Kong, and he’d ultimately spend 11 years in Asia before returning to the U.S.

Before moving abroad, Fitterling recalls advice he received from someone who lived in Hong Kong.

“He told me, ‘Remember one of the most important things when you go to a different culture is that there is no right or wrong, just different,’” Fitterling said. “When you move to a different place, things are done differently, society operates differently.”

Today, Fitterling considers it the best advice he’s ever received, and he’s incorporated that mindset throughout his leadership at Dow, which operates 104 manufacturing sites in 31 countries and employs approximately 35,700 people throughout North and Latin America, Asia, Europe, the Middle East, India and Africa.

Over his nearly four-decade career, Fitterling has played key roles in transforming Dow into one of the most innovative, customer-centric, inclusive and sustainable materials science companies on the planet. He became the CEO in 2018 and was elected chairman two years later.

On his watch, the company has made substantial commitments to social causes. Following the murder of George Floyd, Dow pledged $5 million to help advance racial equality and social justice. Since then, Dow has increased that pledge to $13 million. The company established a Social Justice Council to monitor and guide responses to matters of inequality. Dow began driving policy changes working with state and federal lawmakers.

Months earlier, when COVID-19 was declared a global pandemic, Dow took similar social action, offering financial support to communities and manufacturing and shipping tons of hand sanitizer to pharmacies and hospitals at no charge while Fitterling prioritized physical and mental health of Dow employees.

This year, Dow has sent humanitarian aid to Ukraine while continuing to support and help employees and their families located there.

“The job of a CEO has changed,” Fitterling said when asked why this type of advocacy is important to him. “We want a better planet to live on and a better community to live in. We can’t sit on the sidelines. We’re part of this game and can help make things happen.”

Even before national and global crises, Fitterling was continually accelerating Dow’s sustainability efforts and collaborations. On his watch, Dow became a founding member of the Alliance to End Plastic Waste, an initiative to accelerate efforts to get plastic waste out of the environment.

One idea to reach that goal emerged from a visit to Mizzou Engineering. Fitterling learned about work being conducted in the Mizzou Center for Transportation Innovation led by Bill Buttlar, Glen Barton Chair in Flexible Pavement Technology.

Buttlar had been studying ways to repurpose recycled plastics into pavement mixtures. The two discussed their mutual interests, and soon after Dow provided support and funding for Buttlar to test his ideas. Last year, the research team applied an asphalt mixture containing plastic to a stretch of Stadium Boulevard in Columbia to see how it holds up against harsh Missouri winters and summers.

Those types of networking opportunities are one of the benefits of returning to campus, Fitterling said.

“When you first leave college, you tend to come back for the activities and games, but don’t forget the academics and research, as well,” he said. “Stay in touch with what’s going on and come back to spend time in classrooms and labs. The University will always need financial support, but the network is the most important thing.”

That includes networking with students, too. Fitterling has delivered Commencement remarks and visits classrooms to hear about what students are learning. Last semester, he gave a presentation on engineering leadership for Engineering 1000, a class designed to introduce students to all aspects of the field.

“I’ve talked to students and learned what they’re working on,” Fitterling said. “That exchange of ideas is great for me and great for them.”

Somewhere between presenting at world conferences and meeting with President Biden, Fitterling was back at Mizzou Engineering in March for the Dean’s Advisory Council meeting. Fitterling is co-chair of the council, which is comprised of distinguished alumni who provide guidance and support to the College.

The meeting was held at the Roy Blunt NextGen Precision Health building, part of which bears Fitterling’s name. He was one of the first individuals to make a major gift — to the tune of $6 million — to the health institute, which brings together faculty and medical professionals from across campus to advance life-saving research.

Projects such as NextGen are encouraging, Fitterling said, and will position Mizzou to be a leader in not only health care but also innovation and education.

“I’m glad to see the direction the University is headed,” Fitterling said. “There are a lot of changes going on, and it seems things are on a good path. We need to keep up that momentum.”

And if anyone knows about momentum, it’s Jim Fitterling.