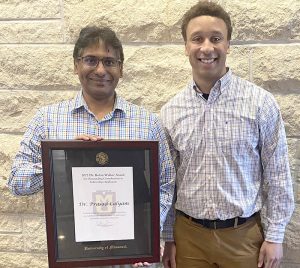 Mizzou Engineering’s Prasad Calyam has been named the inaugural recipient of the Robin Walker Award for Graduate Student Mentoring at Mizzou.

The MU Graduate School and Fellowships Office established the award this year to recognize a faculty or staff member who effectively supported a graduate student’s application for a globally or nationally competitive award. Calyam helped Roland Oruche, a PhD student in computer science, successfully apply for a National Science Foundation Graduate Research Fellowship (GRF) in 2021.

“Dr. Calyam was the driving force and largest contributor to my success in winning the NSF GRF award, which enabled me to focus my PhD thesis topic on intelligent agent modeling for human-centered applications,” Oruche said in his nomination letter. “I was honored to have received a prestigious award in which the contributions stemmed from my advisor’s countless efforts, patient support and tireless mentorship.”

In addition to the GRF, Oruche has received four other national awards including the prestigious GEM Fellowship.

Calyam is an associate professor in electrical engineering and computer science, the Greg G. Gilliom Professor of Cyber Security and Director of the Cyber Education, Research and Infrastructure Center (Mizzou CERI).

“I appreciate Roland nominating me for the Robin Walker Award,” Calyam said. “But most of all, I’m proud of his many accomplishments.”

The award’s namesake, Dr. Walker, worked at the University of Missouri for 20 years, including as director of leadership and professional development in the MU Graduate School. Over her career, she mentored hundreds of NSF GRF applicants and managed a GRF website with resources used by thousands of visitors from more than 100 college towns throughout the U.S.

Be part of an engineering program that supports and celebrates your success. Become a Mizzou Engineer!