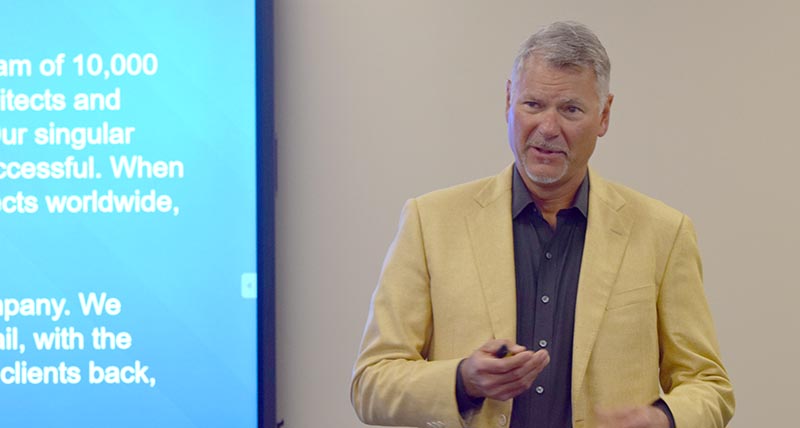 Success in life often comes from random connections — so take advantage of opportunities to get out of your comfort zone. Ask a lot of questions. And have a genuine interest in what you’re doing. Those were some words of wisdom Ray Kowalik, CE ’85, MS CE ’99, shared with Mizzou Engineering students earlier this month.

Kowalik is Chairman and CEO of Burns & McDonnell, a full-service engineering, architecture, construction, environmental and consulting solutions firm based in Kansas City. On April 12, he shared his industry expertise with students taking ENGINR 2001, the Engineering Leadership and Strategic Communications course.

One of the keys to his success has been to have faith in those around him, Kowalik said.

“I believe in trusting people,” he said. “Good leaders trust their people to run things. I’m a big believer in finding the right people and letting them be successful.”

That’s also what keeps him motivated. Kowalik said he’s driven by the desire to see others — and the company — succeed.

“I love to watch our people have success in their careers and to create an environment where all employee-owners can be successful,” he said.

The most successful people, Kowalik said, are the ones who take initiative. Don’t wait to be told to do something, he said. To be a leader, you first have to volunteer to do the work.

Kowalik also said he’s been shaped by what he calls his “good reads” — books such as Good to Great by Jim Collins, Freakonomics by Stephen Dubner and Steve Levitt and anything by Malcolm Gladwell.

Some of the best advice Kowalik said he’s ever received came from a Mizzou Engineering professor.

“He said, ‘Go to graduate school and teach an undergraduate class, it will make you better at public speaking and being prepared,’ and he was right,” Kowalik said.

Kowalik is a member of the Dean’s Advisory Council and the Civil Engineering Academy of Distinguished Alumni.

Be part of an engineering program that connects you with leaders in the field. Become a Mizzou Engineer!