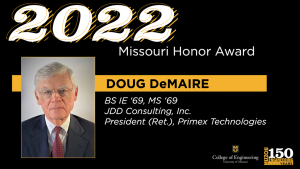 Doug DeMaire, BS IE ’68, MS IE ’69 has received the 2022 Missouri Honor Award recognizing his outstanding contributions to the College of Engineering and the engineering profession. The award is the highest accolade bestowed on an engineering graduate.

DeMaire said he was “very pleased” to have received the recognition. “It’s a distinct honor,” he said.

DeMaire has supported the Department of Industrial and Manufacturing Systems Engineering over the years, earning him a spot in the IMSE Hall of Fame in 2014. Specifically, he has sought opportunities to enable Missouri students to attend Mizzou and pursue an engineering degree, such as the one that provided the foundation for his career success, his nominator wrote.

The DeMaires established the J. Douglas and Barbara N. DeMaire Scholarship, which supports IMSE students from Missouri, with preference given to those from Barton County, where DeMaire grew up.

“Mizzou provided a solid engineering education,” he said. “We had a good time at MU, but more importantly, it prepared both of us to go out and have successful careers. We find great satisfaction in knowing this scholarship is helping the College of Engineering continue to produce excellent engineers and leaders for tomorrow.”

After earning his master’s degree, DeMaire went to work for Olin Brass in the St. Louis area. The company manufactures and distributes copper and copper-alloy sheet, strip, plate, foil and fabricated components. Over the next 26 years, he rose in the ranks from a special projects industrial engineer to a position as Manager of Industrial Engineering. He then established a market research department and later became the Director of Marketing before taking the role of Business Planning and Management Systems. Working with the Olin Brass team, he and colleagues successfully expanded the business from $300 million in sales to just over $1 billion in five years.

DeMaire’s last role for the company was serving as Vice President of Strategic Planning and Business Development for Olin Corporation. One result of this work was the spinoff of Olin’s Defense Business into a new public company, Primex Technologies, Inc. DeMaire joined the new company, serving as Executive Vice President and then President of Primex Technologies, Inc. He successfully ran the company until it was acquired by General Dynamics, at which time he retired.

During his career, DeMaire provided mentorship and guidance to numerous younger industrial engineers. “He was generous with his advice and recommendations, while at the same time giving us room to let us each grow individually,” one of his supporters wrote for his nomination.

After retirement, DeMaire established his own management consulting practice and worked with a variety of clients over the next 15 years until his second retirement.

The DeMaires reside in St. Petersburg, Florida, where he’s played banjo in several bluegrass bands and Barbara is an accomplished figurative sculptor.