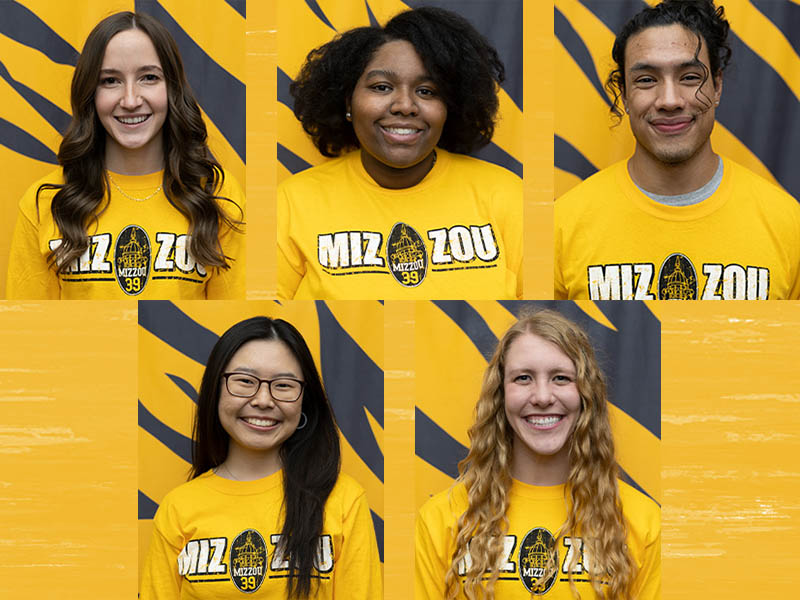 Five Mizzou Engineering students were selected for the Mizzou ’39 Award, a prestigious honor that recognizes outstanding academic achievement, leadership and service to the University of Missouri.

Riley Jackson is a senior from Blue Springs, Missouri, majoring in electrical engineering. She is currently an undergraduate researcher investigating a power efficient hardware accelerator design for neural networks in the Analog/Mixed-Signal, VLSI and Devices Laboratory at the University of Missouri. Jackson previously conducted undergraduate research in Dr. Hunt’s research lab. Jackson is president of the Mizzou Engineering Student Council, Director of Finance for the Society of Women Engineers, was the president of Eta Kappa Nu, IEEE’s honor society, and an Honors Ambassador. Jackson previously interned at Apple as an Engineering Program Manager and will be returning upon graduation.

Datara Lee is a senior from Kansas City, Kansas, majoring in chemical engineering. She serves as a supervisor for Mizzou’s Career Center, where she has worked for more than three years. Lee is a member of the National Society of Black Engineers (NSBE) and currently serves as the National Finance Chairperson. Previously, she was NSBE’s Region V Parliamentarian and treasurer of Mizzou’s chapter. Lee has been an ambassador for the College of Engineering since 2019. She is also a member of Omega Chi Epsilon Honor Society.

“It’s an honor to be recognized for this prestigious award,” Lee said. “A lot of the work that I’ve done at Mizzou was to provide students who are often overlooked on this campus resources to be successful and show them that someone cares.”

Ymbar Polanco Pino is a senior from Maracay, Aragua, Venezuela, majoring in mechanical engineering. This academic year he has conducted undergraduate research through the Massachusetts Institute of Technology, where he studies plasma physics in the electric propulsion systems of spacecraft. He is also a part of Mizzou’s zero-gravity NASA Space Grant research team, where he studies microfluidics in a zero-gravity environment on-board the G-FORCE ONE aircraft in Florida. At Mizzou, he is a McNair Research Scholar who has conducted research around energy harvesting and renewable energy. Polanco Pino has been a member of the National Society of Black Engineers (NSBE) all four years and led the reinstatement of the Society of Hispanic Professional Engineers (SHPE) chapter at Mizzou this year – he is currently the president of SHPE. Polanco Pino is now conducting research in STEM Education, where, through the THRIVE program, he is directing a documentary that focuses on uplifting and empowering underrepresented students in STEM. Additionally, Polanco Pino is the lead actor in an upcoming film.

“I want to highlight the value of giving just to give,” he said. “I’m very fortunate to be in a position to serve others, and I am grateful that the work I do on Mizzou’s campus is appreciated, but the time and effort I invest into making this campus a better, more loving place is not validated by any awards and acknowledgment. For me, it’s validated by the lives I’ve impacted for the better because I wouldn’t be here if it weren’t for the many people who have shown me love.”

Polanco Pino’s mentor is Terrell Morton, assistant professor in the Department of Learning, Teaching & Curriculum in the College of Education and Human Development.

“I am so honored to receive this award,” she said.

Shyu’s mentor is Aaron Harms, director of the MU Writing Center, where Shyu has served as a tutor since 2019.

Sarah Thompson is a senior from Collierville, Tennessee, majoring in biological engineering with an emphasis on the Environment. She is also pursuing minors in business, math, engineering sustainability, and a certificate in GIS. Thompson is a student-athlete on the Women’s Swim Team at Mizzou, where she has received 16 All-American honors. She is currently preparing for her 5th NCAA Championship in March. Thompson is an officer of the Intercollegiate Athletics Committee and members of the Student-Athlete Advisory Committee, Athletes in Action, and Campus Lutheran Church. Thompson has been involved in research around detecting COVID-19 in wastewater and tracking invasive species using spectral signatures via satellite imagery.

Thompson’s mentor is Noel Aloysius, associate professor of biomedical, biological and chemical engineering. His research focuses on environmental change and hydrology with a focus on land and water management in agriculture. He also works with remote sensing for natural resource management.

Giovanna Guidoboni, a professor of electrical engineering and computer science with a joint appointment in mathematics, was the mentor for Lily Omowumi, who is pursuing a master’s in applied mathematics. Guidoboni is also Associate Dean for Research in the College of Engineering. Her technical focus is on biomedical applications and computational modeling of fluid flows.

Ilker Ozden, assistant professor of biological and biomedical engineering, was the mentor for Benton Berigan, who is pursuing a doctorate degree in biological sciences. Ozden’s technical focus is on motor control and learning, neural signaling and optogenetics.

Be part of an engineering school that connects you with interdisciplinary opportunities and mentors from across campus. Become a Mizzou Engineer!