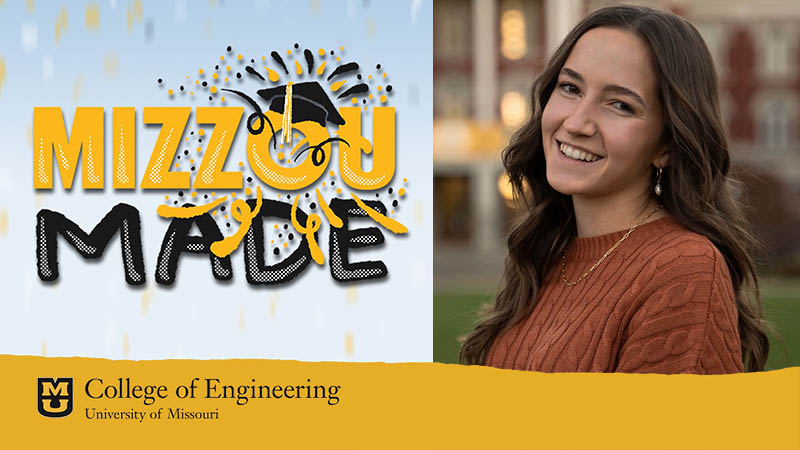 When she first came to Mizzou, Riley Jackson had never met an engineer. After she graduates on Friday, she’s headed to Apple where she’ll lead a team of engineers as a project manager in new product introduction.

What a difference four years make when you take full advantage of Mizzou Engineering.

For Jackson, that’s meant pursuing research, student organizations and other opportunities, including an internship at Apple, where she spent last spring and summer in a similar project management role.

“Being a project manager sounds intimidating, especially when you’re an undergraduate leading a team of professional engineers,” she said. “But I had gained leadership experience by serving as president for different organizations. Research was extremely beneficial, too, and helped me develop problem solving and critical thinking skills.”

Jackson came to Mizzou from Blue Springs and originally thought she wanted to enter a medical-related profession. Her freshman year, she was an undergraduate researcher in a bio-materials lab through the Discovery Fellow Program. After learning more about engineering options, she decided to pursue a degree in electrical engineering.

Jackson’s electrical and computer engineering coursework proved invaluable, giving her the technical know-how needed to work at a top tech firm. Specifically, a course on electromagnetic fields helped her better understand the wireless chargers in a new Apple Watch she worked on during her co-op.

She’s also gained hands-on experience working in the Analog/Mixed-Signal VLSI and Devices Laboratory alongside Syed Kamrul Islam—chair of electrical engineering and computer science — and PhD student Omiya Hassan, who has become a mentor.

In between the lab and the classroom, Jackson has filled her time at Mizzou with a slew of extracurricular activities.

She’s been an Ambassador for the Honors College and president of Eta Kappa Nu, the electrical engineering honor society. She has served in various chair positions for the Mortar Board Society, Alpha Omega Epsilon and Society of Women Engineers. She’s studied in Scotland as part of a Fulbright Summer Institute. She participated in alternative breaks. This semester, she received a Mizzou 39 Award for her service to the University.

Her role as president of the Engineering Student Council and being part of Engineer’s Week royalty (she was ultimately crowned Queen) are among her most cherished experiences at Mizzou, she said.

“Being involved in Engineers’ Week royalty, I got to spend the week with nine other amazing juniors and seniors who are all going to do great things,” she said. “And through Engineering Student Council, we’ve been able to make a lot of changes and voice or opinions in the College. I’ve made a lot of friends and a lot of fun memories.”