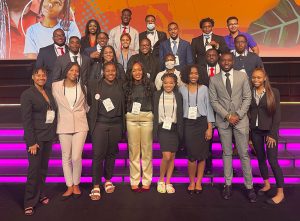 The Mizzou chapter of the National Society of Black Engineers (NSBE) won Region V Chapter of the Year at the organization’s 48th annual national convention, capping off a memorable four-day trip to Anaheim, California.

“This was the first (NSBE) hybrid convention, with over 11,000 participants, and the first time we have been in person in over two years,” Janell Mason, Mizzou NSBE president and biomedical engineering major, said. “Our group had 25 members in attendance for the convention, and I enjoyed sharing this experience with them.”

In addition to the group winning the chapter award, three Mizzou NSBE members received individual honors. Maya Townsend and Hirut Suraphel were selected as executive board members for Region V, and Trenton Foster won two NSBE scholarships. He was awarded an NSBE Honeywell Integrated Pipeline Program Scholarship and an NSBE BCA/Affiliate/Fellows Scholarship. This is the second year in a row Foster has been awarded an NSBE scholarship at their national convention.

The convention featured a mix of in-person, hybrid and virtual workshops, sessions and a career fair. Mason, a Chicago native, had a special family connection for one of the workshops she attended.

“I had the opportunity to hear my uncle speak on his third book during one of my favorite workshops, ‘Black Faces in High Places’,” Mason said. “It was exciting to see the NSBE family come full circle.”

The convention’s career fair featured over 200 employers, including energy companies, manufacturers, educational institutions, computer developers and government entities, representing a variety of engineering fields. Most employers had a physical presence at the conference, but also planned for virtual interviews and networking opportunities.

“I used this opportunity to not only network, but I was able to work on my communication skills by talking to so many companies,” Mason said, “Many others and I got interviews and job offers the next day while connecting with many people on LinkedIn.”

Williams, from St. Charles, Missouri, enjoyed both the career fair and the resume review session offered during the convention. Like Mason, he was able to connect with recruiters and landed an interview the following day.

“For the resume review, representatives from Apple assisted us in polishing up and completing students’ resumes,” Williams said. “As for the career fair, it was encouraging to see company recruiters that looked like me, as this reassured me that I can excel in engineering and be myself.”

All are welcome to join Mizzou NSBE. Visit their website to learn more about this student org.