Those who know him aren’t surprised at all. Students routinely praise him for being enthusiastic, caring and knowledgeable; “one of the best professors on campus,” as one student said. Colleagues say he exemplifies the best qualities of an instructor-researcher. 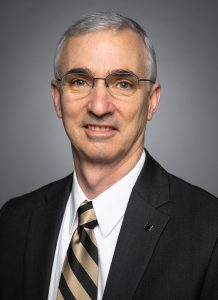 And those who nominated him for the honor gave example after example of ways in which he’s gone the extra mile, be it hosting a listening session for Black students following the death of George Floyd or reaching out to a student who suffered a personal tragedy.

Noble, professor and chair of industrial and manufacturing systems engineering, is one of just five faculty members across the MU campus who received a 2022 Kemper Award, one of the highest honors for teaching bestowed by the university.

“One of the things I find most satisfying about getting the Kemper is that it acknowledges my true motivation for why I’m here, and that’s to serve the students and to put them on a trajectory to contribute to society in meaningful ways,” Noble said. “That’s why I’m a professor.”

Over the course of his 30-year career at Mizzou Engineering, Noble has earned a reputation for being an inspiring educator passionate about preparing the next generation of industrial engineers. Outside of the classroom, he conducts research and works with industry, all with students in mind. He serves as director of undergraduate studies and interim director of graduate studies to provide additional mentorship and support.

In the IMSE Department, Noble has taught production system design, material flow and logistics systems, and capstone design. He helped design and currently teaches Engineering 1000, a College-wide introductory course that helps students decide which areas of engineering they wish to pursue. Noble also connects students with successful IMSE alumni, providing networking opportunities that help lead to internships, co-ops and careers in the industry.

He also founded the Mizzou site of the Center for Excellence in Logistics and Distribution (CELDi), a research and educational consortium that consists of university partners and industry members.

But it’s his compassion that students notice.

“There is no question that Dr. Noble is an outstanding teacher,” Sheila Connelly ’20 wrote in a letter supporting his nomination. “What makes Dr. Noble even more impressive, though, is that his character outside the classroom walls is awe-inspiring.”

“His dedication and passion for all of Mizzou Engineering and the students within the college are unwavering,” Smith wrote.

Noble says he enjoys taking time to provide those extra layers of support, which he says is a cornerstone of industrial engineering education at Mizzou.

“One of the things we’ve always said within our department is that we want to be known for excellent teaching,” he said, adding that IMSE has had two other Kemper recipients. Professor Emeritus Cerry Klein was in the second class of Kemper recipients in 1992, and former Professor Thomas Crowe in 2003. “It’s satisfying to join them.”

Be part of an industrial engineering program with faculty committed to your success. Learn more about IMSE at Mizzou.