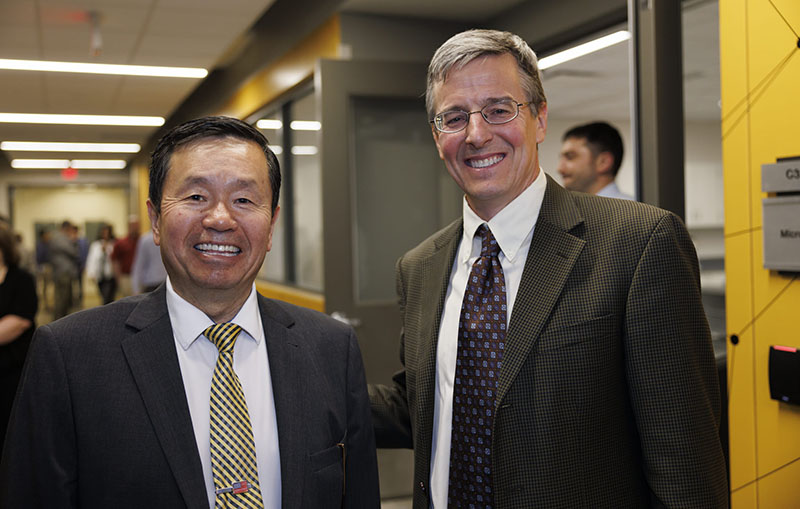 The new MU Materials Science & Engineering Institute will be a catalyst for innovative research and discoveries that could lead to technologies to solve some of the world’s most pressing problems, Dr. John A. Rogers said.

And if anyone knows about connecting fundamental sciences to world-changing technologies it’s Rogers. A member of the National Academy of Science, National Academy of Medicine and National Academy of Engineering, Rogers is widely considered the father of the field of bio-integrated electronic technology. He has more than 80 patents and patent applications for devices and patches that interface with the human body to continuously monitor and measure physiological changes.

Rogers delivered the keynote address at the MUMSEI Symposium and Ribbon Cutting on Friday and joined university administrators to help celebrate the opening of the institute. MUMSEI is a partnership between Mizzou Engineering and the College of Arts & Science and involves 10 academic departments.

“The University of Missouri has a number of prominent faculty members in areas of materials science, but up until this point, it’s been a fairly distributed collection of programs and efforts driven by individual faculty,” said Rogers, who is director of the Querrey-Simpson Institute for Bioelectronics at Northwestern University. “This institute will serve as a really powerful vehicle for pulling those faculty together and establishing a mechanism to drive collaborative work.”

Specifically, Mizzou Engineering researchers will work with faculty from chemistry, physics, biology and other sciences at Mizzou to investigate the design and application of high-performing materials through machine learning, atomistic simulations and other emerging technologies.

And solutions to some of the world’s grand challenges will be found in the intersection of those collaborations, Rogers said. While the traditional research is key to foundational understanding, he sees opportunities for that work to translate into outcomes that will benefit humanity.

“Many grand challenges for society can be addressed with technology and advances in engineering,” he said. “And material science lies at the core. Whether it’s thinking about how to purify water or create energy in a renewable fashion, how to explore space or grow food more economically — all of these efforts involve material science, and they all require collaborative, interdisciplinary approaches to identifying and implementing solutions.”

Just as important, Rogers said, will be the educational components of the institute. He believes the institute will play a critical role in getting new generations excited about the possibilities of STEM.

“Ultimately, the core mission is to educate the next generation of engineers and scientists, and I think this kind of multidisciplinary work creates a rich environment, a diverse and varied environment, for students,” he said. 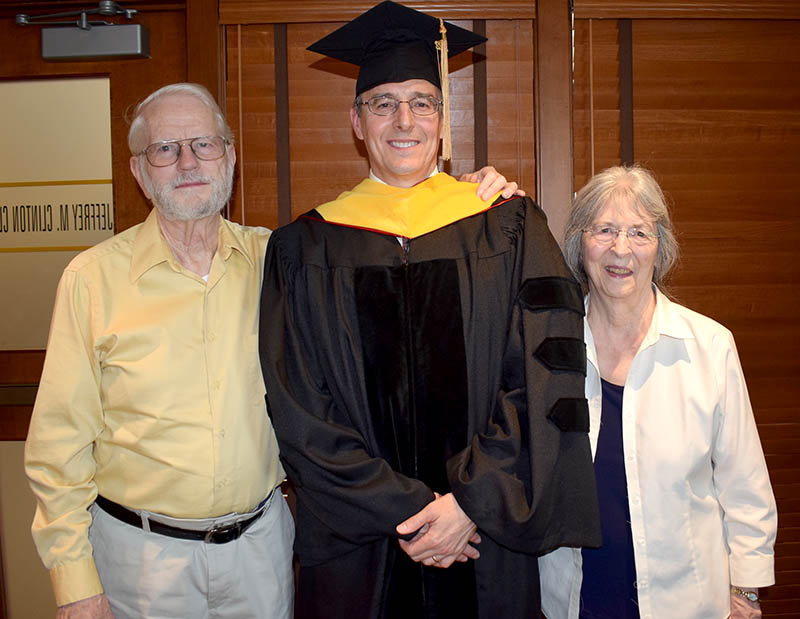 While on campus Friday, Rogers joined the next generation of engineers at the Spring 2022 Commencement ceremony, where he addressed graduates before receiving an honorary doctorate.

“The Doctor of Science Honoris Causa recognizes Dr. Rogers’ pioneering contributions in bio-integrated electronics,” said Noah Manring, Dean and Ketcham Professor. “Professor Rogers has had a significant impact on our campus, too. We have hired successful new faculty members from Rogers’ lab, including Zheng Yan, an assistant professor in biomedical, biological and chemical engineering and mechanical and aerospace engineering, who was a postdoc in John’s lab and has since received an NSF CAREER Award.”

Additionally, Manring said, at least 64 faculty and students from 11 departments at Mizzou have collaborated with Rogers’ lab, coauthoring more than 25 papers with his group.

Rogers earned his undergraduate degrees from the University of Texas at Austin and a PhD from Massachusetts Institute of Technology (MIT). He also was a Junior Fellow in the Society of Fellows at Harvard University, a member of technical staff and director at Bell Laboratories and the highest chaired faculty member at the University of Illinois and the Beckman Institute for Advanced Science and Technology.

His parents, John R and Pattiann Rogers, both earned undergraduate degrees from Mizzou and were on hand to celebrate his honor this past weekend.

“Any honorary doctorate represents an important recognition of career accomplishments, but this particular one has a special significance because I was born in Missouri, I have extended family in Missouri and most importantly because my parents were undergraduates at Mizzou and first met there as sophomores,” Rogers said.

On Saturday, the Rogers’ family had the opportunity to explore the campus, including stops at John R. Rogers’ old dorm and the academic building where the couple took French class together.

In addition to the beautiful campus, Rogers said, he took note of the momentum happening at Mizzou.

“I was impressed by the new facilities and various initiatives,” Rogers said. “I sensed a tremendous amount of energy and ambition there, I toured amazing resources and met talented people. The future at Mizzou looks really bright.”