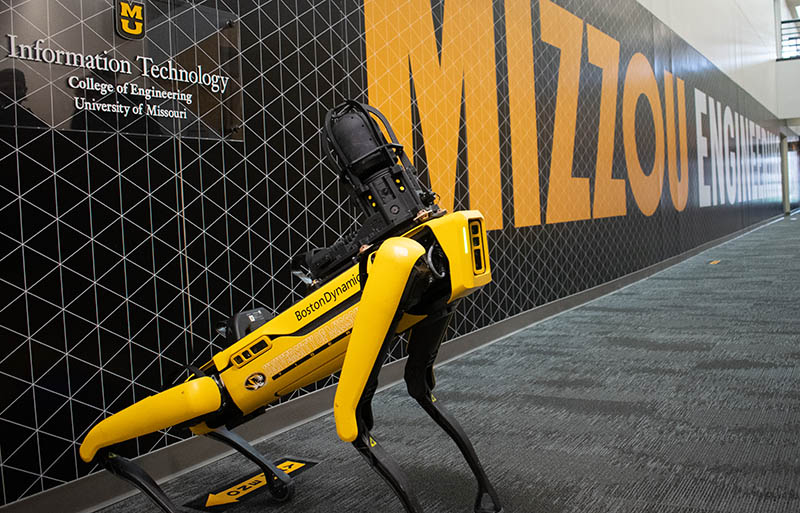 Students in the Autonomous Systems Lab at Mizzou Engineering are teaching Spot some new tricks.

Spot is a four-legged robotic dog created by Boston Dynamics. Mizzou Engineering’s Spot made international news last semester when it performed alongside Marching Mizzou and the Golden Girls at a home football game.

But there’s a lot more to the dog than its novelty, said Kristofferson Culmer, assistant teaching professor of information technology and director of the lab. It’s a teaching tool preparing students to use the technology of tomorrow.

“Students are exploring and getting hands-on experience working with cutting-edge technology,” Culmer said. “We believe autonomous systems will be a huge part of the future of technology and will increase in their applications over time. We want students to get that real-world experience so when they go on to graduate school or industry or entrepreneurial pursuits, they have that foundation.”

This semester, students are learning to customize Spot’s software development kit (SDK), improve upon its navigational abilities and ultimately enhance its capabilities based on how future owners want to use it.

“Right now, we’re gathering information from industries about how they would implement an autonomous system,” Culmer said. “We’re asking them what that would look like, what they need and what Spot could be used for, applications such as fire or radioactivity detection.”

The Autonomous Systems Lab has partnered with Ameren and a group of its students are working with Ameren engineers this semester to improve Spot’s connectivity and networking capabilities. During manually controlled, and most autonomous missions, the Spot robot has to remain connected to a controlling software application. Similar to a wireless cell phone connection, as Spot moves through its environment it has to connect to multiple wireless access points in order to be linked to either its remote or a dedicated network. If connectivity is lost, the robot shuts down, which could interrupt its task.

The team is working to strengthen Spot’s connectivity through a Wi-Fi booster or configuring an external router to ensure the robot seamlessly transitions from one access point to the next.

Another student in the Autonomous Systems lab is teaching Spot to detect and identify objects. Others are being trained to use Spot’s attachable arm, which can open doors and pick up objects.

And one group of students has worked with MU’s Department of Theatre to get Spot to recognize and respond to voice commands. Spot uses specific movements representing “yes,” “no” or “maybe.” Using those techniques, engineering and theatre faculty and students will present a public reading of a new play “hosted” by the robot. The free event starts at 7:30 p.m. Saturday, April 16, at Studio 4, McKeen Gymnasium, 672 Hitt St.

This summer, Culmer and his team hope to start training Spot to walk across campus on its own with the goal of one day leading a campus tour. To do so, they’re working on equipping Spot with GPS navigation.

“We’re one of the only college’s allowing undergraduate students to really get their hands on a real-world autonomous system and explore all of its features,” he said. “When they graduate, they will be ready to help industries start to integrate autonomous systems into their day-to-day operations. Students are excited to be part of implementing these emerging technologies.”

Be part of an innovative education that prepares you for the world of tomorrow. Learn more about the Information Technology Program at Mizzou Engineering!