Mizzou Engineers and students participating in Engineering REUs (Research Experiences for Undergraduates) were among nearly 130 student researchers across campus who had the opportunity to showcase their work last month. During the Mizzou Summer Undergraduate Research Forum, teams presented projects ranging from material structural stability to tracking nitrogen risk in soil.

We spoke to some of our presenters to learn more about undergraduate research at Mizzou and what our students can do in 10 weeks. 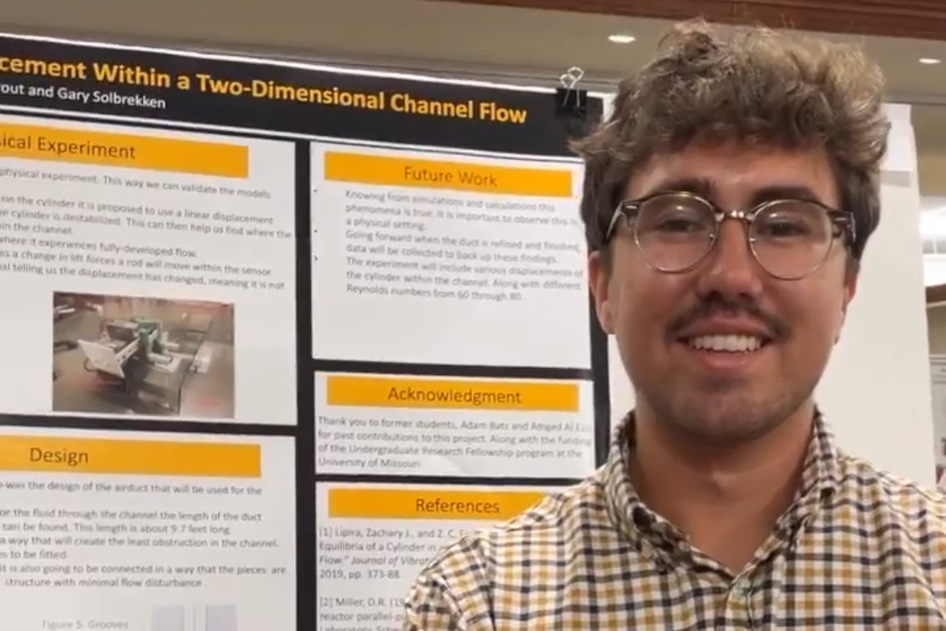 Alex Trout is a senior in mechanical engineering. He spent the summer researching the displacement of a cylinder in a two-dimensional flow. The theoretical phenomenon is widely accepted, but Trout worked to physically demonstrate the concept. “There was a lot of freedom with what I was able to do,” Trout said. “When talking to my professor [Gary Solbrekken], he told me to be creative with it and I thought that was a really fun part about this research.” 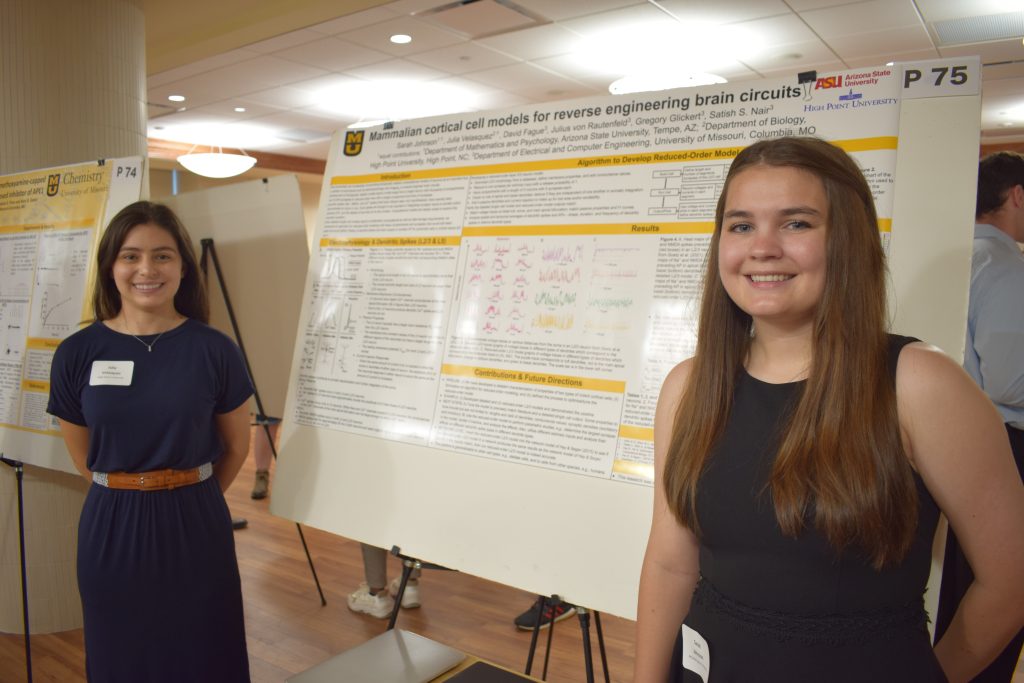 Sarah Johnson and Julia Velasquez presented at the forum as a part of Satish Nair’s REU exploring computational neuroscience. Velasquez is a neuroscience major at High Point University and Johnson is a mathematics and psychology major at Arizona State University. The two of them completed a 3-step computational modelling project examining spikes on neurons in the brain. They engaged in a literature review, created models and tested the models. “This lab was actually my first-choice program,” Velasquez said. “At my university, we don’t have the opportunity to study computational neuroscience, so I saw this as an opportunity to learn something completely new and get out of my comfort zone.” When asked whether she would recommend completing an REU, Johnson encouraged students to go for it: “I’ve learned so much about the research process that I thought I might have known but definitely didn’t before coming here.” The students in the REU also discussed the book “Make it Stick: The Science of Successful Learning” by Peter Brown, Henry Roediger and Mark McDaniel to enhance the research experience. 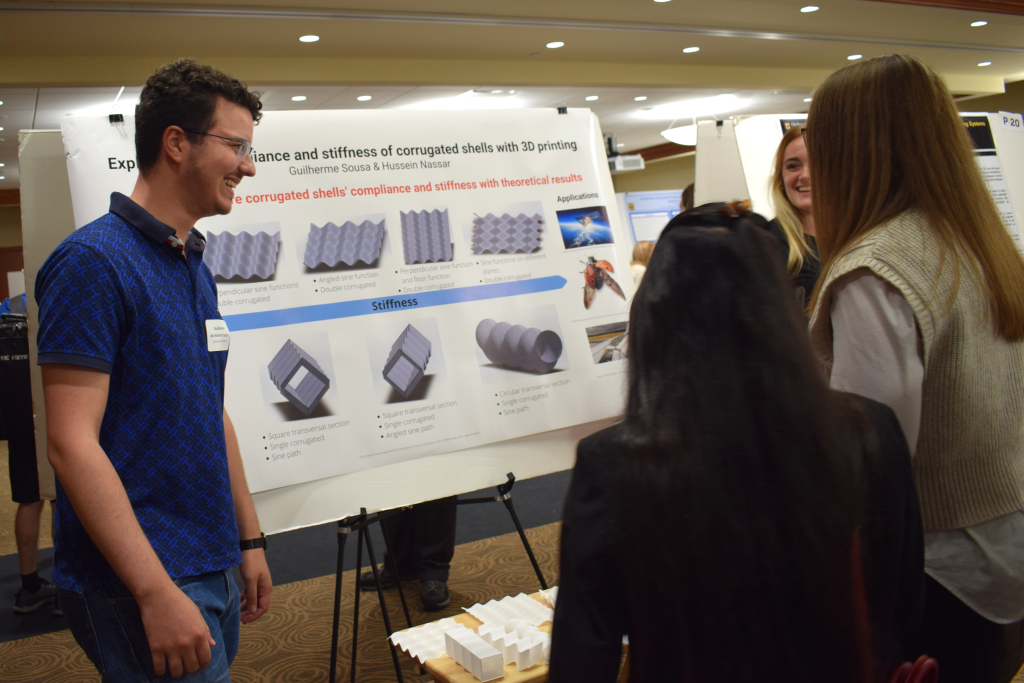 Guilherme De Amorim Sousa is a senior working on a mechanical engineering degree and business minor. He transferred to Mizzou earlier this year and right away got involved researching with his professor, Hussein Nassar. Sousa has spent the summer 3D printing and examining objects’ stiffness and pliability. At the forum, he explained his project using the shapes he created, allowing visitors to try to squish and stretch corrugated tubes and egg carton-shaped planes with slight changes to their angles. “There are a lot of different types of research you can do,” Sousa said. “If you like to study other peoples’ research, you have that option. If you want to work hands-on-the-job, you have that option, too.” 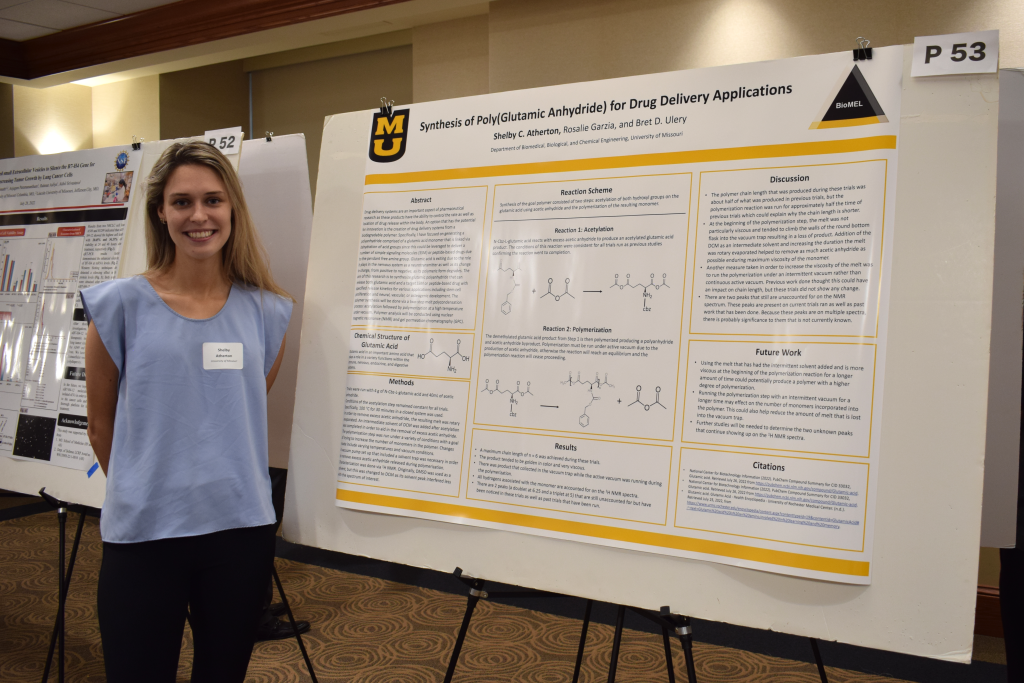 Shelby Atherton is a senior studying chemical engineering and chemistry. She picked up a research project developing a polymer that can be used in drug delivery systems from another student who is going abroad for the next year. So far, Atherton says she has learned a lot about how to conduct undergraduate research and has enjoyed working with another undergraduate. “We talk about what we think might work and get to try our own pathways and thoughts,” Atherton said. “Get into it as early as you can and reach out to professors. They are always looking for undergrads to pick up projects and help with tasks.”

The research forum was broken up by a block of oral presentations. Only eight students presented projects in this session and two of them were engineers. 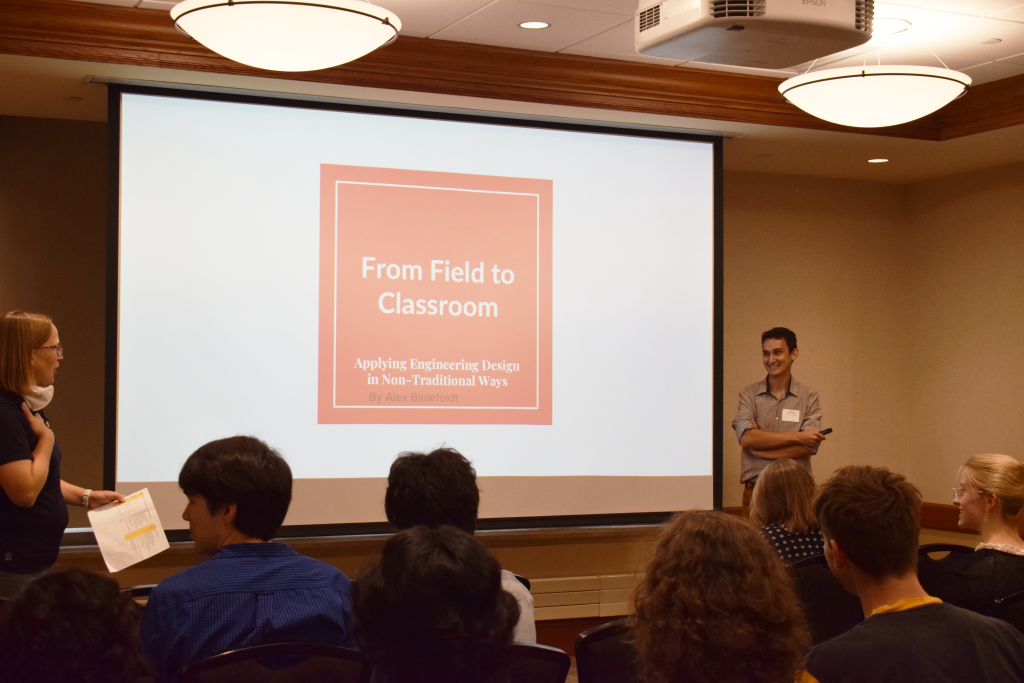 Alex Bielefeldt is a senior in biological engineering. Over the summer, he turned what he learned working on a graduate student’s project into an interactive lesson for 10th graders on environmentalism and agriculture. “I enjoyed seeing the kids come together for the final activity and really show us that they could be enthusiastic about what we do [agriculture],” Bielefeldt said. He chose to orally present his work because the research project is incomplete, and a presentation provided the chance to explain the impact of his work. His advice for others considering undergraduate research at Mizzou? “Don’t be discouraged just because your project does not adhere to strict academic expectations. Effort and impact of the core idea behind your project matter more than the numbers you can put up.” 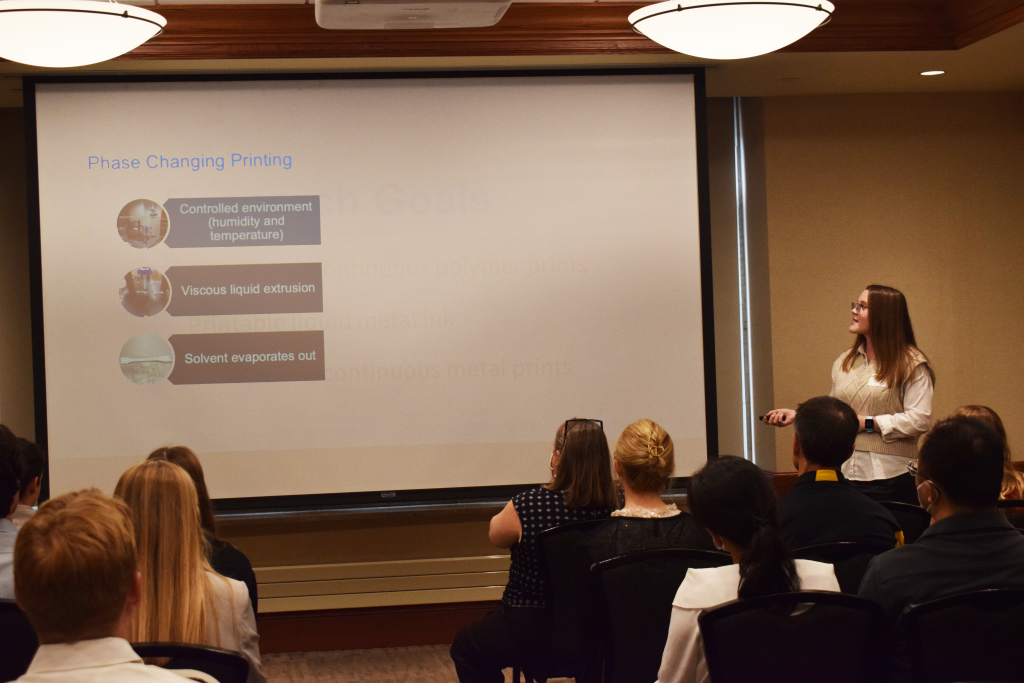 Emma Kate Price is a sophomore studying mechanical engineering and astrophysics at Harvard University who came to Mizzou to participate in Reginald Rogers’ material science and engineering REU. Price studied phase-changing 3D printing and its ability to conduct electricity across porous and self-supporting structures. She is from rural Missouri and was glad she could come back for the REU. “I really do love Mizzou,” Price said. “We have such an amazing facility.”

After the oral presentations, another round of students presented posters explaining their undergraduate research projects. 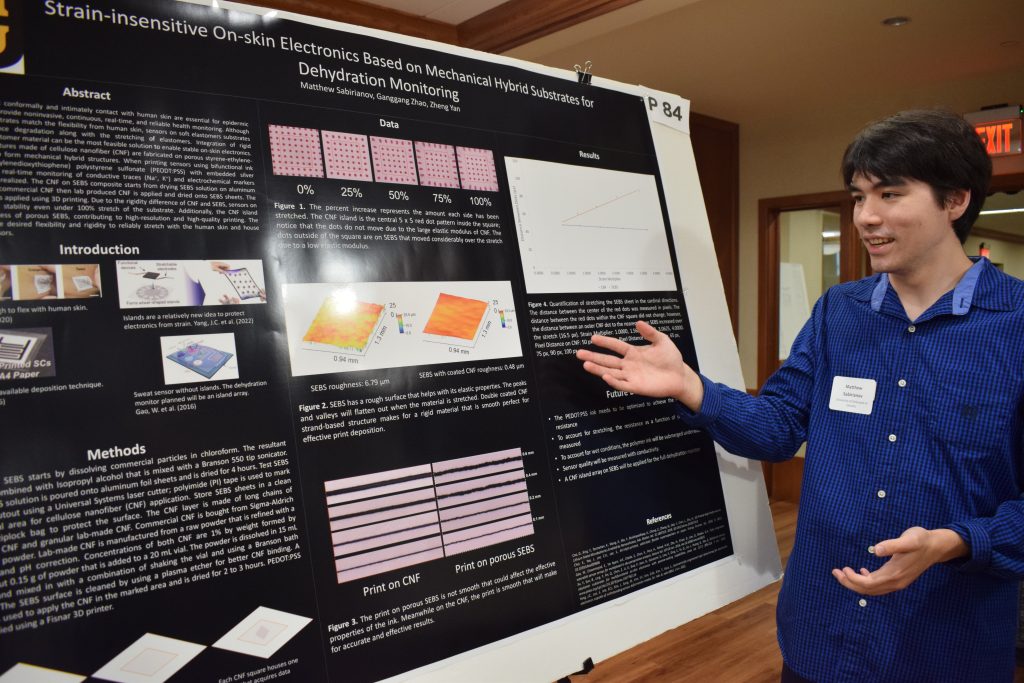 Matthew Sabirianov is a chemistry major at the University of Nebraska who participated in Rogers’ material science and engineering REU. This summer, he helped create a sweat sensor for a wearable dehydration monitor. “We met the goals for our project. We have a smooth surface to house the sensor and the elastomer is working how it is supposed to,” Sabirianov said. When he applied to the REU, he was looking for a research path to pursue going forward and was grateful that Mizzou had a material science REU he could participate in. “I got lucky I got a material science [REU].” 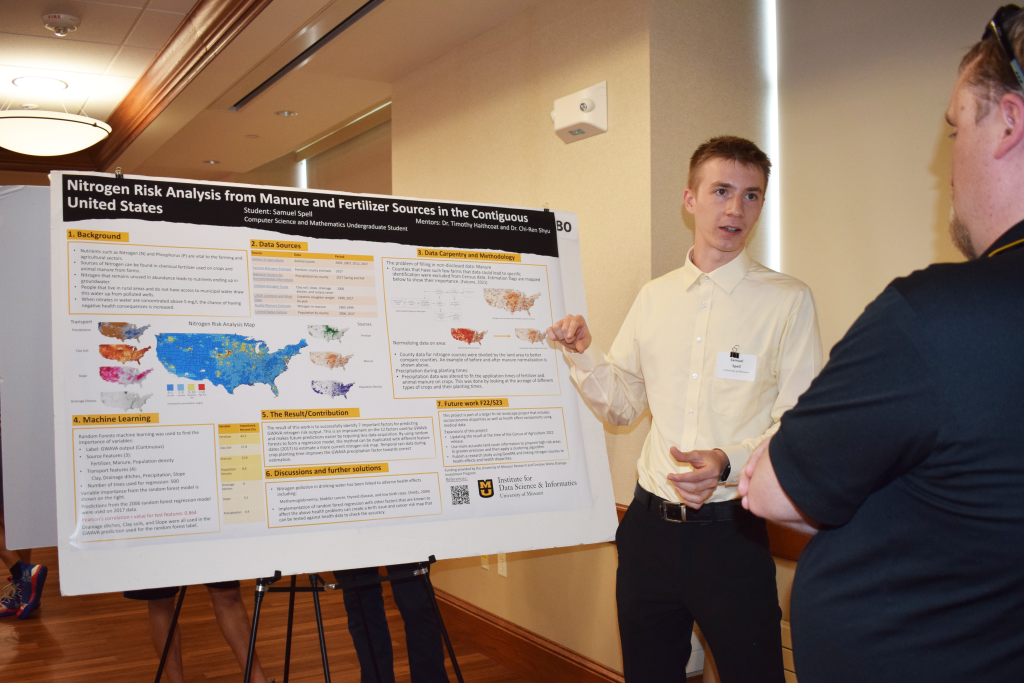 Samuel (Sam) Spell is a junior, majoring in computer science and math, from Columbia. He worked on creating a nitrogen risk map for the US using public data and big data analytics techniques. Spell highlighted counties that were, as of 2017, at high, moderate and low risk of nitrogen pollution in drinking water: information which can be used to predict or explain adverse health effects. “When I was able to start mapping the data, it was so relieving to see it visualized. It was a fun last few weeks, putting it together and seeing the outcome,” Spell said. He worked with Timothy Haithcoat, who encouraged him to join the project, and Chi-Ren Shyu. “[Haithcoat] would always know what to do,” Spell said. His favorite experience with Shyu happened days prior to the research forum. “Dr. Shyu was great because he was able to help me with the machine learning piece,” Spell said. “He told me so much valuable information and it really helped me finalize my poster and get everything ready to be presented.” 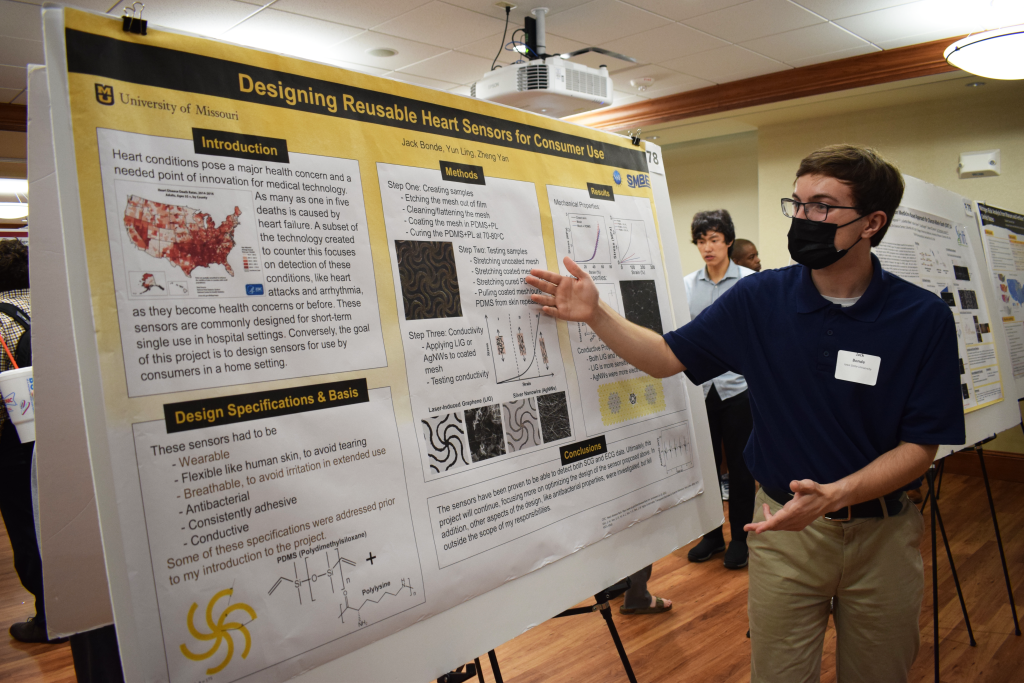 Jack Bonde, who participated in Rogers’ material science and engineering REU, is a chemical engineering major at Iowa State University. He applied to the REU to learn more about what research was like outside of Iowa State. Bonde’s project involved researching a design for a wearable sensor to detect electrocardiogram and seismocardiogram information for consumers. These sensors are typically single-use and found in clinical settings. “We wanted to design something that could be reused and sold to the consumer for sustained use at home,” said Bonde. “Regardless of whether you want to go into research, [an REU] is a good experience for figuring out what you want to do.” 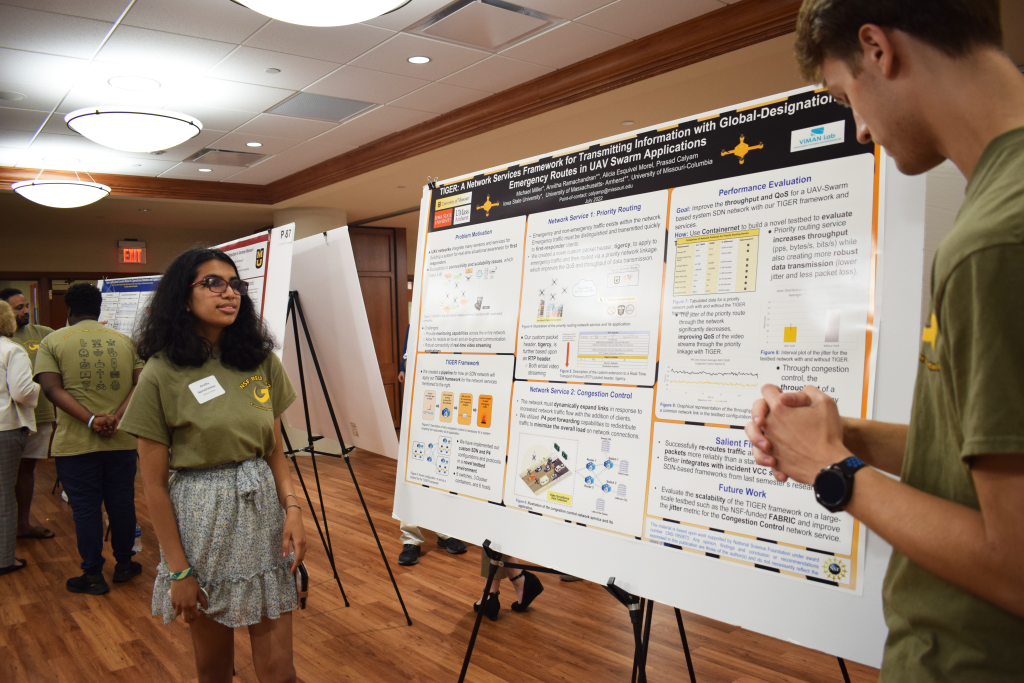 Anvitha Ramachandran and Michael Miller took part in Prasad Calyam’s REU exploring consumer networking technologies. Miller is an aerospace engineering student from Iowa State University. Ramachandran is a computer science and computer engineering major at University of Massachusetts, Amherst. The two paired up to study traffic routing for first responders. “I enjoyed learning new skills like the P4 programming language and getting better at my presentation skills,” said Ramachandra. Miller’s favorite part of the experience was “building a custom network and creating methods to facilitate how information is distributed through it.” 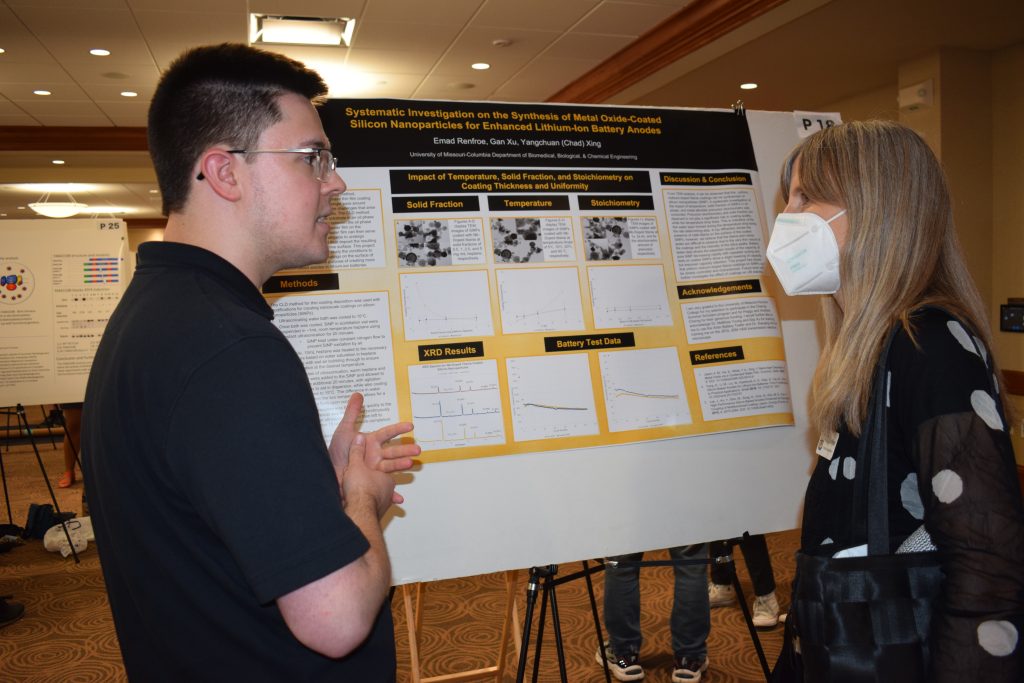 Emad Renfroe is a senior in chemical engineering. Over the summer, he studied the synthesis of thin metal-oxide coatings on silicon nanoparticles to build enhanced lithium batteries. These coatings would prevent the expansion of silicon from destroying anodes within lithium batteries and facilitate higher capacity batteries. “The research field has been looking into silicon anodes for quite a while, but we still can’t apply them commercially because of this expansion,” Renfroe said. “My project has a lot of potential for industrial applications.” He also had advice for other undergraduates interested in research, “Get involved early and find people who you find their work interesting and just reach out. There are a lot of research groups, but they are not huge so you can get more one-on-one opportunities with your professor.”

All the students presenting brought polished posters, fantastic findings and an enthusiasm for expanding knowledge. Congratulations to everyone who participated!