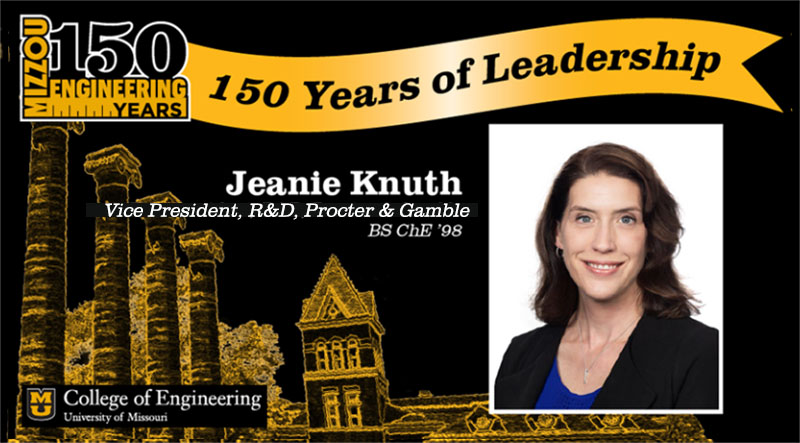 Over the past decade, there’s been a shift in the collective mindset around the phrase “like a girl.” It used to be an insult, signifying weakness, especially in the athletic realm. Then, in 2014, the Always brand launched a video showing that young girls hadn’t yet bought into that stereotype. Asked to run, throw or fight “like a girl,” these small children gave it their all.

The campaign was an overnight success. People around the world began using the hashtag #LikeAGirl. The phrase was being etched on chalkboards around Manhattan. Celebrities embraced the tagline. More importantly, nearly 70% of women and 60% of men said the video made them rethink the phrase “like a girl.”

So Jeanie Knuth will be thrilled to hear us say she engineers like a girl.

Knuth, BS ChE ’98, is Vice President of Research & Development at Procter & Gamble and leads the global production development of feminine care products. She worked on the “Like a Girl” campaign, now used as a case study on how a brand can change the world.

“We were there to say, ‘Throw like a girl. Don’t let that be an insult, let it be empowering.’ Now, it’s in the mainstream, and women own that statement. That kind of influence on culture is critical,” Knuth said. “It’s incredible just being there to empower women and give them support.”

Knuth has blazed less visible trails, too. Years ago, when her daughters were young, she pushed back against the notion that one couldn’t do their jobs from a computer or phone while tending to family responsibilities. She multitasked as she took her kids to school while simultaneously calling in to a meeting. Essentially, she demonstrated a precursor to remote work we’ve grown accustomed to today.

Along the way, she’s advocated for women and minorities in the workplace and made it a point to show workers at all levels that executives and managers are human and can be vulnerable, too.

“I didn’t realize how fortunate I was with support and empowerment I had until about 10 years into my career,” she said. “When I realized how lucky I’d had it, I knew I wanted to be part of a change.”

And she’s used what she learned at Mizzou Engineering to effect that change.

“Chemical engineering was an incredibly challenging workload and course load, but the instructors I remember most from both content and mentorship were Dr. Paul Chan and Dr. Tom Marrero because of their mentorship and encouragement,” she said. “I can’t believe how fortunate and blessed I am, and there’s no way I’d be where I am today if it weren’t for Mizzou Engineering.”

Knuth grew up in the St. Louis area with a love of math and science. She thought she wanted to be a chemist, but her sister — also a Mizzou Engineering chemical engineering alumna — encouraged her to study engineering, instead.

At Mizzou, Knuth quickly found a home and community. She enjoyed the small atmosphere of the chemical engineering program, joined the Society of Women Engineers and explored research and career options.

Through career fairs and networking, she landed an internship with P&G, then another. When it became clear what she wanted to do after graduation, Marrero offered her a position as an administrative assistant to give her organizational and leadership experience.

“It was the Missouri Method before it was branded,” Knuth said. “Working in his office taught me so much about what it took to present research and helped me develop skills I would use at P&G.”

Knuth graduated with offers in research and development from three major companies. After accepting P&G’s offer, she was elated when she got an invite to join the Always brand.

“They put me in product development, and I had such a passion for that type of work and the fact that it was helping women,” she said. “I was solving real problems that effect real, everyday life.”

Knuth would spend the first five years of her career in research and development before she had the opportunity to join a business team. In that role, she learned to sell the product — what matters to the consumer and how product designs could help women.

Knuth was so successful in that position, the company sent her to Europe to replicate the work. While the consumers and problems were similar, over the next three years, she learned how to navigate different markets and regulations.

“That was a great experience where I was then project manager and director for a team that did the science, and my job was to figure out all of these interfaces with Europe, China and the U.S.,” she said.

‘Lift as you climb’

In her VP role, Knuth strives to be a role model who “walks the talk.” She wants to be viewed as authentic, relatable, accessible and as a human.

Knuth admits new hires are sometimes taken aback by her personal approach, and many are surprised when they first hear her talk about a time she cried at work or a project failed.

“They realize that leaders are human, and I’ve seen a lot of power in that,” Knuth said. “It’s hard to admit when you’re wrong or a project didn’t work. You feel a bit vulnerable. But if you’re running an experiment and the results come out different than you expected, that’s not failure, that’s learning.”

In her role, she also continues the tradition of mentorship she saw first-hand at Mizzou. At P&G, she personally mentors more than 50 individuals, and in the community, she mentors younger women through the YWCA of Greater Cincinnati.

“Lift as you climb,” she said.

Get an engineering education that empowers you. Become a Mizzou Engineer!