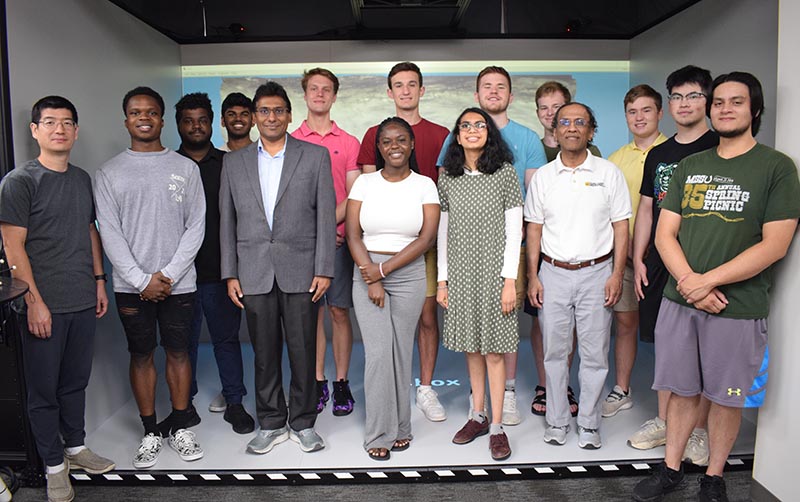 Ten undergraduate students spent the summer working with emerging consumer networking technologies through a program that now has many of them excited about a research career and thinking about graduate school.

Funded by the National Science Foundation, the Research Experiences for Undergraduates (REU) in Consumer Networking Technologies is a 10-week program that lets students explore research. The goal is to give them a glimpse of what it takes to solve open-ended research problems following a disciplined and guided process, and encourage them to pursue graduate school, said Prasad Calyam, REU director and Greg L. Gilliom Professor of Cyber Security in the Department of Electrical Engineering and Computer Science (EECS).

For Anvita Ramachandran from UMass Amherst, the REU confirmed she’s on the right track.

“I was already considering graduate school prior to this program because research interests me,” she said. “Although my opinion hasn’t changed, my skills to get there have improved. I can see the path more clearly than before. The REU is a really versatile experience for undergrads, so it will help if you’re looking to acquire new skills such as teamwork and communication or are looking at graduate school.”

Elsaid was one of two Mizzou Engineering students selected for the REU. Other participants come from both research and non-research universities in Missouri and across the U.S. Over the course of the program, students worked in teams on projects around applying research methods to problems involving new and emerging technologies. They will present their research at the Undergraduate Research and Creative Activities Forum this week and will prepare papers for publication based on their findings.

“We had a lot of fun,” said Osay Edo-Ohonba from the University of Missouri-Kansas City. “This was an amazing experience, and we thank everyone who was a part of it.”

Elsaid and Robby Criswell, a sophomore information technology major at Mizzou, studied ways to predict whether a user will get cyber sickness while interacting with virtual reality.

“VR is really popular these days. Especially since COVID, there are a lot of useful applications for VR in terms of education and training,” Elsaid said. “But cyber sickness — a type of motion sickness where people can experience headaches and nauseousness — is something that can hinder the experience.”

The team improved upon a system to detect and predict those symptoms based on biological indicators such as increased heart rate or perspiration. Additionally, the model takes into account what’s happening on the virtual screen and a user’s head and eye movements, Criswell said.

What differentiates the system from other methods is that it’s explainable.

“Previous models that detected and predicted cyber sickness were black box models,” Elsaid said. “What’s novel about ours is we can explain that prediction, so users know how the machine is making that decision. It’s a more trustworthy detection.”

The research will be helpful for further studies that explore reducing cyber sickness and mitigating its effects, Criswell said.

Shaynoah Bedford, a student at the University of the Virgin Islands, Shreyas Prabhudev from San Jose University in California, and Trevor Zobrist from Southeast Missouri State University, studied cyber security around Internet of Things, or IoT, systems — those household devices that connect you to a variety of cloud-based services.

“Essentially, the problem we’re trying to solve is that many people have IoT devices like Alexa or smart home cameras, and all of those things are connected,” Prabhudev said. “Because they’re so small, computational resources are only optimized for the device itself and are not secure. It only takes one attack on a device for an attacker to get into your entire home network.”

The devices aren’t designed with the intention of dedicated computational power to analyze security related data, Zobrist added. That’s why the team worked on a system that first offloads the heavy data processing to a remote cloud server, which uses machine learning to classify the type of information. Routine data goes back to the device and user, while malicious traffic is redirected away from the network.

The REU was a good opportunity to explore research, Bedford said. “We were able to dip our toe in the water and see whether we like it or not.”

Calyam advised the group with the help of Roshan Lal Neupane, a graduate student mentor.

Edo-Ohonba teamed up with Benjamin Philip Hall from Murray State University in Kentucky and Joseph Kessler from Truman State University to study ways to create simulated environments for a HoloLens headset and the CAVE, a mixed reality facility sponsored by NSF and located in the Mizzou Center for Cyber Education, Research and Infrastructure (CERI).

“We collected data using drones of urban environments such as buildings across campus and used that data to try to recreate accurate 3D models, exploring different ways to use them through the CAVE or Microsoft HoloLens,” Kessler said.

Essentially, the team created a pipeline, taking  3D points from images to create a mesh texture that could be viewed in virtual and mixed reality devices, Hall said.

“There are multiple applications for this in education, city planning and improving self-driving cars,” said Hall, who is planning to pursue a master’s degree.

“It felt like a puzzle, more open-ended than I thought,” Kessler said. “We were trying to improve upon a process, and it was awesome. I always saw myself getting a bachelor’s degree, but I can definitely see myself attending graduate school for a master’s and maybe a PhD down the road.”

Edo-Ohonba said he was most surprised by how he learned through research.

“It wasn’t like a classroom environment where you’re learning things, but rather it was more like you’re doing something, and in order to do that, you have to learn about it,” he said. “It was a very refreshing way to learn in that kind of an environment.”

Project: TIGER: A framework for Transmitting Information with Global-designation of Emergency Routes for UAV swarm-based applications

Michael Miller from Iowa State University and Anvitha Ramachandran studied programmable unmanned aerial vehicles (UAVs), or drones. The idea was to create a network that uses swarms of UAVs for visual cloud computing applications. Essentially, the drones collect and send data such as video feeds to a cloud server to analyze before directing it back to a client, Miller said.

“Basically, the problem we’re trying to solve is since UAV networks are comprised of different kinds of drones and different kinds of sensors, we want to integrate them so they can be easily monitored to provide real-time video streaming so first responders can be aware of a situation,” Ramachandran said.

Miller has done research at Iowa State before, however mostly in mechanical engineering.

“It was more about assembling, building and testing where this was more on the peer-reviewed research side,” he said. “It was a good experience. I’m definitely thinking about graduate school and, after this, I’m confident I could complete graduate school.”

Esquivel Morel, who is pursuing a PhD in computer science, also served as the Graduate Student Coordinator for the REU.