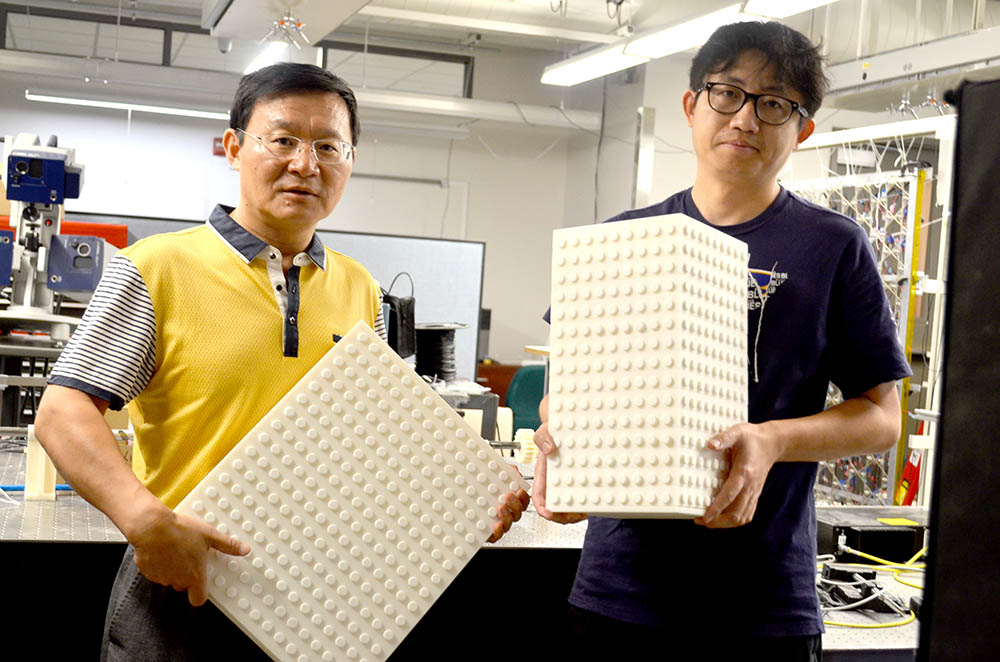 Professor Guoliang Huang and graduate student Hui Chen show off the three-dimensional structure they created to observe audio waves in the fourth dimension.

Using a type of material that conducts electricity on the edges while insulating the inside, a Mizzou Engineering team has discovered a way to control sound waves beyond our three-dimensional environment.

Huang and Hui Chen, a post-doctoral fellow in mechanical and aerospace engineering, built a simulated environment in which they observed the acoustic waves in four-dimensional space.

The applications for this discovery are hard to fathom because they defy the physical laws we understand today. In the world we know, acoustic waves, like all particles, travel in three dimensions, naturally deteriorating along the way.

In the quantum realm beyond our 3D space, particles can be distributed over space and electrical phases. In this case, Huang envisions a device that could divide an acoustic beam, sending multiple strips of the same sound wave to any number of locations, including on the other side of walls or other obstacles, with no decrease in audio quality.

“You could split sound waves to many locations with no decay,” Huang said. “This beam splitter device would enable flexibly adjusting the number and angle of output beams. Therefore, the synthetic-dimension-based acoustic device offers fascinating future prospects in the telecommunications network.”

The work builds on research around topological insulators, an exciting field with fundamental interest as well as practical applications in optics, light, acoustics and quantum computing.

To get the answer, Huang turned to passive metamaterials he’s developed in his Structured Materials and Dynamics Lab. These man-made materials are coated to protect an object from its environment.

For this study, the team used a new type of passive material to demonstrate how sound waves can take any path to travel from corner to corner.

Researchers started with a two-dimensional slab of the material, then stacked slabs on top of one another to create a 3D structure, or so-called “synthetic” dimension.

“In this paper, we formulate theoretical modeling and provide experimental evidence in which a higher-order wave phenomenon could be observed in a 3D acoustic structure,” Huang said. “To make this conceptual leap by creating synthetic dimensions in the acoustic structure, waveguides are constructed by chains of strong coupled discrete resonators connected by space modulated channels, where phases can be used as extra parameters that augment the physical space. By slowly varying the phase along the synthetic dimension, we demonstrate the higher-order topological edge-bulk-edge and corner-bulk-corner sound transport in finite-sized acoustic structures.”

In other words, researchers were able to guide soundwaves from the bottom left corner to the top corner using any combination of movements to get there. Thus, the acoustic wave did not simply travel right, left, up or down.

Compared to traditional waveguides — which can control sound but only in one direction — these synthetic wavelengths have two main advantages. They are flexible yet robust against geometrical imperfections and defects because they are protected from wave scattering, or the collision of a sound wave against a material object.

“We demonstrated that we can control the path of sound by engineering phases along synthetic dimensions,” Huang said. “This paper provides the first experimental glimpse into the physics of a higher-dimensional quantum effect in acoustic metamaterial.”

The next step is to gradually reduce the size of the 3D structure to make it smaller and more compact.