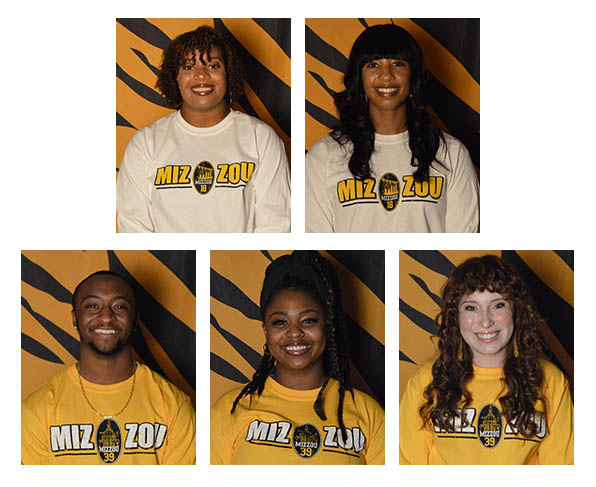 “It is truly an honor to be a recipient of the Mizzou 18 Award,” Bradley said. “I really think it is a reflection of all the people who have helped me along this journey so that I can help others who are coming after me.”

The awards are named for the year the university was founded, 1839, which Smith believes symbolizes Mizzou’s growth through the years.

“Being recognized as one of Mizzou’s outstanding 39 seniors means joining a legacy of leaders and change-makers,” she said. “I remember looking at the recipients of previous years and feeling the impact they have made on the Tiger community. Being recognized in this cohort helps me to understand that I, too, have changed this university for the better, and for that, I am grateful.”

“Being named a Mizzou 39 recipient means so much to me,” he said. “Being a first-generation college student, I have tried to make the most of every opportunity given to me at Mizzou. It is an honor to be recognized for my achievements, and I am humbled to be part of a group of such elite students.”

The Mizzou Alumni Association, which bestows the awards, held two virtual ceremonies last week to reveal and recognize the recipients.

The Mizzou 18 recipients were selected based on their world-class research, collaboration with faculty and staff and their demonstrated leadership with undergraduate students.

Bradley, from St. Louis, is a doctoral candidate in the biological engineering program. Her research is an interdisciplinary project between tissue engineering and predictive analysis. It primary focuses on the early detection and treatment for a type of disc degeneration that causes chronic lower back pain.

“What I love most about the bioengineering program here at MU is how interdisciplinary it is,” she said. “This has allowed me to really be innovative with my research and collaborate with others across the Mizzou campus.”

Avery is also from St. Louis and studying biological engineering. Her research focuses on biomaterials and the development of biomedical applications for implants and sensors.

Mizzou 39 recognizes 39 seniors for their academic achievement, leadership and service to Mizzou and the community.

Jones is a chemical engineering student from Kansas City. He is the current president of the National Society of Black Engineers (NSBE), is on the Mizzou Tour Team and is a member of Alpha Phi Alpha Fraternity, Inc., Zeta Alpha Chapter. He’s also been part of two planning committees for the Diverse Engineering Professionals Conference and is a George C. Brooks Scholar.

Smith, a civil engineering major from Dubuque, Iowa, has been named to the Dean’s High Honor Roll every semester of her college career. She was honored as Outstanding Junior Undergraduate for the Civil and Engineering Department. Smith served as a Summer Welcome Leader for the Mizzou Class of 2022 and works as the Communication and Internal Operations Coordinator for the MU Tour Team, which she joined as a freshman. At Mizzou Engineering, she’s held three positions for both the student chapter of the American Society of Civil Engineers and the Concrete Canoe Team. This past fall, she was a member of the Mizzou Homecoming Top 10 Royalty. And she is currently vice president of the Civil Engineering Honor Fraternity, Chi Epsilon.

Upon graduation, Smith will start as a project engineer at Clayco, where she’s been an intern for two summers.

LaRue-Hill, from Kansas City, is studying computer science and documentary journalism. She is a videographer intern at Mizzou. Last year, she was one of 37 students in the 2020 class of Pulitzer Center Reporting Fellows. She has also had an internship at Twitter.

Jones and Smith both recommend Mizzou to those interested in studying engineering.

“I would definitely recommend the chemical engineering program to prospective students,” Jones said. “It is extremely rigorous, but the professors will work with you, and they care about their students.”

Civil engineering faculty and staff also care deeply for students and do everything possible to help them succeed, Smith said.

“I would absolutely and enthusiastically recommend the Civil Engineering Program to prospective students,” she said. “I would not be where I am today without the countless faculty members who worked with me and taught me through this journey.”

Congratulations to the recipients for being recognized for their hard work and dedication.

Want an engineering education that gives you lots of opportunities? Apply to Mizzou today.