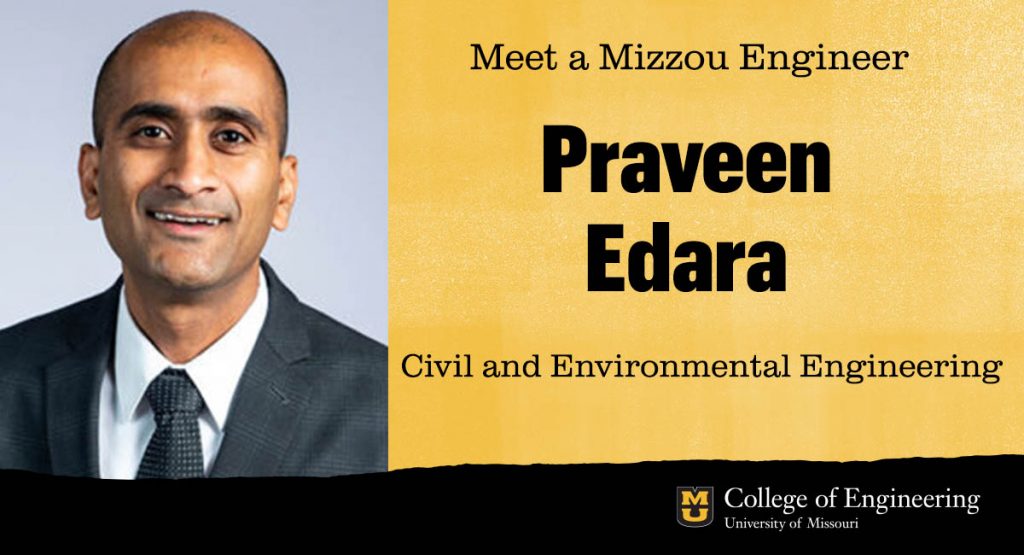 Diverging diamond interchanges have been shown to reduce the number of car crashes by more than half and save states millions of dollars in construction costs. But before the first one debuted in 2009, researchers across the country spent years testing them in simulated environments. Meet Praveen Edara, who was among the first to study this innovative and life-saving design.

Edara is professor and chair of the Department of Civil and Environmental Engineering (CEE), a role he has held for more than two years. At the helm, he strives to preserve the culture of the department that welcomed and supported him when he first came to Mizzou in 2007.

“Civil engineering faculty from Day 1 have wanted me to succeed, and that’s a fantastic place to be,” he said. “It’s a family environment where people are friendly and willing to help.”

That support has benefited not only Edara but everyone who rely on public roadways.

Edara began studying diverging diamonds in the 2000s when the design was just a concept.

Unlike a traditional intersection with stop lights, diverging diamonds temporarily move vehicles to the left side of a roadway. This allows vehicles to make left turns onto a major interstate without having to stop at a red light to wait for oncoming traffic.

Two years after he came to Mizzou, Missouri was the first state to implement the design, with a diverging diamond debuting in Springfield. His research collaboration with the Missouri Department of Transportation allowed Edara to play a major role in showcasing the benefits of the design. In addition to reducing crashes, diverging diamonds have been shown to reduce traffic congestion and are less expensive to build than traditional intersections.

In 2015 — two years after one was constructed at Stadium Boulevard and I-70 in Columbia — Edara and CEE Professor Carlos Sun were the first to research the safety of the interchange using real traffic and crash data.

For the study, they reviewed 8,400 crash reports from 20 diverging diamonds and comparison sites in Missouri, according to reporting from the Columbia Missourian. They found that diverging diamond interchanges resulted in a 63% to 73% decrease in fatal and injury crashes and a reduction of other crashes by up to 50%.

The study earned Edara’s research team a “Sweet Sixteen” High Value Research Project” award from the American Association of State Highway and Transportation Officials. And they received the 2015 and 2016 Best Paper Awards from the Transportation Research Board’s Committee on Operational Effects of Geometrics.

Their findings have since been used across the country to make the case for diverging diamonds to improve high traffic intersections.

“It’s always good to be recognized, but most importantly it’s the design itself that is so helpful in reducing crashes,” Edara said. “The safety improvement is amazing.”

Now, Edara is finding new ways to improve roadways. He’s currently creating an artificial crash data set researchers could use to test statistical and machine learning models. Those data sets mimic real traffic and crash data but are important because they factor in variables that are missing from the actual data. With that simulated information, models can help make predictions about where and why crashes may occur.

“Accidents are so random, so anything we can do to find the factors that contribute to crashes — be it driver related, or roadway related, or environment related — will help,” he said. “If we can better understand the causes, we can devise countermeasures to prevent them or ensure they won’t be as severe.”

Edara’s interest in civil engineering comes naturally. His father was a civil engineer for a government agency, and he grew up with a love for math and physics.

“I always enjoyed physics as it explains much of how the world works. There is physics behind how vehicles move, how planes fly, how structures behave under loads, how they fail, etc.” he said.

After earning a bachelor’s in civil engineering from Indian Institute of Technology, Edara went on to earn his master’s and PhD from Virginia Tech. He worked as a research scientist for the Virginia Department of Transportation’s research council in Charlottesville, where he also gave guest lectures at the University of Virginia. That’s where he discovered a love of academia.

At Mizzou, he’s held various positions including James C. Dowell Professor of Engineering and College Faculty Fellow for Research, Industrial Engagement and Entrepreneurship. He previously served as director of graduate studies and has overseen various committees.

As chair of CEE, Edara has several short and long-term goals. He’s currently working on strategies to increase undergraduate enrollment, while still preserving the close-knit culture of the department.

That includes making sure students are able to get to know individual professors on a more personal level.

Pre-COVID, “I would see students flocking to faculty offices, and it’s good to see that they want to talk to faculty and learn more about research or get career advice,” Edara said. “I haven’t witnessed a single instance where a faculty member in the department has said ‘no’ to a student wanting to seek advice.”

Edara is also in the process of creating an industry consortium to better prepare students interested in construction management. The idea is to get about 10 companies to join the consortium and help determine future programming and improve career opportunities for students.

Already, the department is home to the Missouri Center for Transportation Innovation (MCTI), a powerful network of partners from across the UM System and MoDOT. And other CEE faculty are currently collaborating on innovative research with cross-campus partners such as the School of Medicine.

“Our department has partnered with several units across campus: Architecture Studies, Communication, the College of Agriculture, Food and Natural Resources, School of Medicine and the Trulaske College of Business,” he said. “There’s a lot of collaboration potential cross campus that we would like to continue exploring.”

With an appreciation of the department’s legacy of teamwork and an eye on new possibilities, Edara is optimistic about the future of CEE at Mizzou. And he’s thrilled to be part of it.

“I love teaching, research, and working with faculty and students,” he said. “I particularly like advising students on research projects involving federal and state sponsors and industry partners trying to make the roads safer for everyone in the state. There’s no other job I would rather have.”

Learn more about Civil and Environmental Engineering at Mizzou!