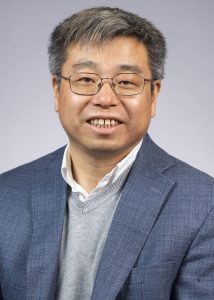 Mizzou Engineering’s Dong Xu has been named a Curators’ Distinguished Professor, the highest recognition bestowed by the University of Missouri System.

“I feel honored and humbled,” said Xu, Shumaker Endowed Professor in Electrical Engineering and Computer Science (EECS). “I’ve been working here since 2003. At the time, I did not expect that one day I would get such an honor.”

Xu is one of two Mizzou Engineering faculty members from EECS to be honored by the UM Board of Curators. Professor Marjorie Skubic, Robert Buescher Faculty Fellow, has also been named a Curators’ Distinguished Professor.

“Dr. Xu is a highly acclaimed scientist, and he continues to help boost Mizzou’s reputation as a leader in engineering,” Mizzou Engineering Dean Noah Manring said. “He has an outstanding record of leadership and service within the College and across campus. He is truly deserving of this honor.”

Xu has conducted a variety of research projects around biology, machine learning and bioinformatics software. He has developed computational methods to analyze big data, including processes that give researchers a manageable way to see and understand single-cell data, which could lead to faster treatments for cancer and other diseases. He also helps plant scientists, initiating the development of the Soybean Knowledge Base database about ten years ago.

At Mizzou Engineering, he served as chair of what was the Computer Science Department and as director of the Information Technology Program.

Xu credits those connections for his success.

“Mizzou is a nice environment for interdisciplinary research with great research opportunities and collaborations,” he said. “A lot of work has derived from those collaborations, and we’ve been able to grow research together.”

“I could go on and on,” Xu said, referring to Mizzou researchers he credits for his success. “We have a great department and a great college.”

Xu also stressed that he’s been able to achieve much on campus because of support from his family, especially his wife, Jingxi Chu.

“This isn’t a 40-hour-per-week job,” he said. “There’s a lot of work to do, from deadlines to evening meetings. I’m grateful for family support.”

Xu is a member of the Institute of Electrical and Electronics Engineers (IEEE) and the IEEE Computational Intelligence Society. He’s a senior member of the International Society of Computational Biology and is a Fellow of both the American Association for the Advancement of Science and the American Institute for Medical and Biological Engineering.