A Mizzou research team has developed a way to better identify cardiovascular dysfunctions through non-invasive sensors that translate signals from the body into information physicians can use to inform treatment decisions. It’s a novel breakthrough that could improve patient care and also allow individuals to monitor heart conditions from home.

The work essentially proves that ballistocardiography (BCG) can provide information that is reliable, accurate and robust, even for critically ill patients, said Mohamed Zaid, a first year PhD student in electrical and computer engineering. 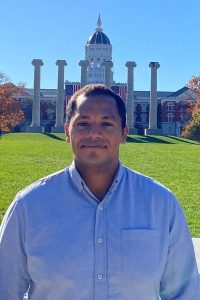 Zaid is lead author of a paper outlining the new system presented at an Institute of Electrical and Electronics Engineers (IEEE) conference earlier this month.

BCG is generated by the periodic vibrations of the human body as blood moves through the circulatory system at each heartbeat. BCG has been around for decades but hasn’t been widely used in clinical settings because of the difficulty of interpreting the data. In a research setting where subjects are healthy and conditions are controlled, BCG has worked well; however, that’s not been the case in real, uncontrolled settings such as surgical intensive care units.

For their work, the Mizzou team used non-invasive devices placed under a head pillow to sense the vibrations produced by each heartbeat.

This system is unique in that it uses mathematical modeling to interpret the data, said Giovanna Guidoboni, co-author and professor of electrical engineering and computer science with a joint appointment in mathematics.

“Ultimately, what the paper shows is, No. 1, BCG can actually be used in settings not as controlled as research labs, and No. 2, the signal has information that is reproduceable and robust, even in situations with critically ill individuals,” said Guidoboni, who is also Associate Dean of Research at Mizzou Engineering.

The model translates the signals into fundamental principles of cardiovascular physiology — such as the heart pumping — in the form of mathematical equations.

“The translation of cardiovascular physiology into equations enables us to draw a chart for interpreting changes,” Guidoboni said. “For instance, if the heart doesn’t pump as much, you can predict that the BCG signal will change in a certain way. If you have a patient with stiffer arteries, then you expect the signal to change in another way. If we are able to associate specific changes in the BCG with specific cardiovascular dysfunctions, then we can really use simple BCG measurements for effective monitoring of cardiovascular health.”

Co-author Marjorie Skubic, a Curators’ Distinguished Professor in electrical engineering and computer science, stressed that this mathematical modeling brings a cutting-edge new dimension to the field of cardiovascular care.

“In the past, experimentally based data collection was used, and that gets you to a certain point,” Skubic said. “But the addition of this modeling capability, which is based on physiological systems, has propelled the work forward. Dr. Guidoboni was the first to develop a physiology-based model that captures the closed-loop architecture of our cardiovascular system and allows us to predict the shape of the BCG signal in health and disease.”

Having the ability to translate and interpret BCG information will be a game changer for doctors who have to make decisions about patient treatment, sometimes without having key information.

“To get those answers now requires pretty invasive procedures, which are not easy to accomplish when you’re dealing with a patient in distress,” Skubic said. “If they can identify what’s going on non-invasively and choose the best treatment, that would be huge for patients.”

The team is also hopeful that Skubic, who has developed numerous home health monitoring systems, will be able to translate the work into a system that patients can use to monitor heart conditions from home.

“This work is a promising starting point to investigate how these changes may relate to a patient’s complex health conditions and give additional clinical insight into their care needs,” Zaid said.

The groundbreaking research earned Zaid and co-authors a spot on the Student Paper Competition Finalist list at the international conference of the IEEE Engineering in Medicine and Biology Society (EMBS).

The conference, which concluded earlier this month, is the largest of its kind, and this year brought together engineers and medical researchers from 97 countries.

“It’s an exciting conference to attend,” said Skubic, a senior member of IEEE who has attended for 15 years. “It’s very large and well attended and has a fantastic mix of technical people, engineers, as well as clinicians, who come together and talk about cutting-edge research. It’s a big deal.”

It was especially significant for Zaid, who is in his first year of the doctoral program.

“It was my first conference, my first paper and my first research experience as a PhD student, so it’s all new for me,” he said. Being named a finalist “was completely unexpected. It was amazing and a big success to be selected at such a big conference.”

The researchers emphasized that the breakthrough was made possible because of interdisciplinary partnerships.

“If you look at the affiliation of the authors and see how many colleges and departments worked together, you can see the convergence of knowledge that has been made possible by Mizzou and the ease with which you can collaborate across campus,” Guidoboni said.

That collaboration will continue as the work moves forward into other areas. Zaid plans to work with MU Health Care to conduct a longitudinal study on patients and collaborate with the School of Veterinary Medicine to study similar procedures.