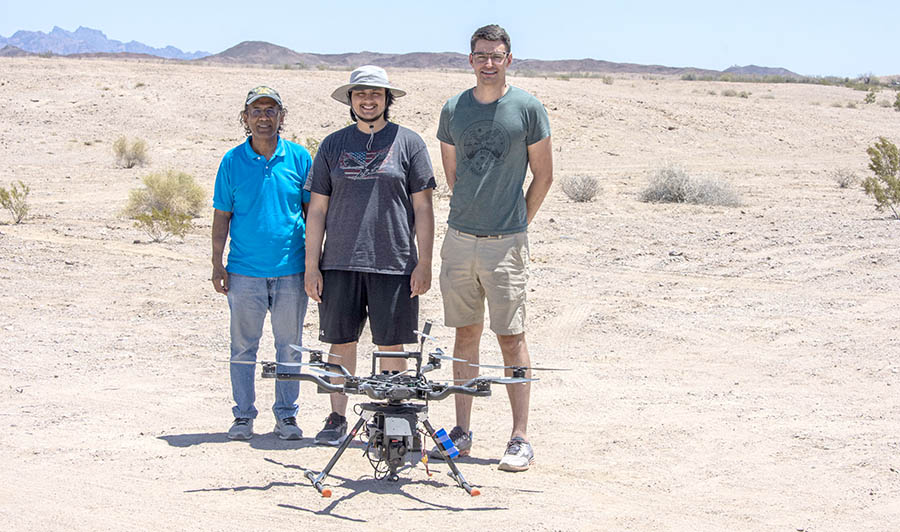 Professor Kannappan Palaniappan and PhD students Jaired Collins and Tim Krock in Arizona, where they used drones to collect data for the Department of Defense.

A Mizzou Engineering graduate student has returned from a two-month internship at the Army Research Laboratory (ARL) in Adelphi, Maryland, where he investigated best practices and use cases around lightweight compact drones.

“The idea is, can you explore the world and figure out what’s going on with incomplete prior knowledge and only a partial map? Then how can you navigate and reason with that updated model of the world?” he said. “My goal is to enable a drone to explore the environment with or without GPS, in a cluttered or degraded environment with obstacles and maneuver safely just using cameras.”

During the internship, Krock worked on a Golden Eagle drone built by U.S.-based Teal. He collaborated with company officials to learn about the engineering specifications of the unmanned aerial vehicle (UAV), how it operates and its capabilities as part of ongoing ARL-funded cooperative research agreement with the Computational Imaging & VisAnalysis (CIVA) Lab at Mizzou under Electrical Engineering and Computer Science Professor Kannappan Palaniappan.

“Our lab does computer vision and 3D reconstruction modeling from videos and metadata,” said Krock, who is pursuing a PhD in Computer Science. “I think that’s a really cool problem. As a computer science undergraduate, I would have been enthralled just thinking about the possibilities.”

Krock investigated the hardware and software stack for developing autonomous drones, drone fabrication and on board-video analysis algorithms for the emerging class of multi-sensor blue-UAV drones.

The internship was the second time Krock has been a key part of Department of Defense (DoD) ARL-funded drone video data acquisition research supported by the CIVA Lab. He spent the month of May at Yuma Proving Grounds in Arizona, one of the largest military installations in the world, where he and teammate Jaired Collins — a PhD student in computer science — worked together to collect extensive visible and infrared video data using a much larger aerial custom-built drone.

While Krock admits the Yuma trip had some initial setbacks, it allowed him to practice real-world problem-solving, project management and teamwork skills. And ultimately, the team ended up getting aerial imagery and data that will be useful for the DoD.

“On the last day of the trip, we got the most flights of any of the groups working in the field, so I was proud of that,” he said. “We got beautiful video over and over again. It gave me a lot of confidence.”

Krock has brought what he’s learned back to Mizzou. Earlier this month, he and Palaniappan conducted an approved drone flight over the Quad at Mizzou, where they captured footage they hope to use to provide a 3D reconstruction of Jesse Hall. The research team has done similar 3D reconstruction with footage previously collected over Albuquerque, New Mexico, and Columbia using a manned aircraft flown by their commercial partner TransparentSky.

“Dr. Pal’s lab has opened a lot of doors for me,” Krock said. “I spent my undergraduate years learning a lot of interesting things, then I got to graduate school and now I get to work intensively on fun puzzles that have high impact. I’ve gotten a ton of hands-on experience, as well as FAA drone flight certification.”

Krock chose Mizzou after earning a master’s in computer science because of a generous fellowship package and because of Palaniappan’s reputation in the field.

“Dr. Pal is a world-class computer vision expert,” Krock said. “Every time he gives a lecture, it’s like he’s giving a TED® Talk. He works on DoD research, he’s working on agricultural applications, and he works on biomedical research.”